Wednesday, 30th April: Glorious sunshine after early fog, not a breath of breeze at first and not a migrant to be seen....then after a warm clear spell, the fog rolled back in again at 0900, and apart from a couple of brief interludes the Bill was fog-bound and cool until early afternoon, to the despair of the few observers present , especially as the breeze had now picked up to ESE3! On a different note...a snippet of info just received regarding one of the colour-ringed Sanderlings seen at the Bill a couple of weeks ago... it was today seen in Denmark! (per Anne de Poitier - excellent; many thanks)
Medmerry: Earnley Flood Pools - Negative news (per Birdguides) that the Black-winged Stilt had not been seen this morning. (AH)
Selsey Bill (0620-1205hrs): Misty at first, but sunny to 0900, then dense fog patches until early pm.  (Obs: OM/CRJ/AH/BJ/DS). An Arctic Skua east, a flock of a dozen Eider on the sea and big feeding flock of terns was about it early on, whilst a search of the gardens failed to locate a single migrant this morning. (OM) Log below...
Great Northern Diver - 4 os
Shelduck - the 2 local birds spent most of the morning on the beach or just os
Great Crested Grebe -1E
Eider - 13 os (flock of 12 and a single)
Whimbrel - 2E
Arctic Skua - 1E
Little Tern - 2E, 20 os also gradually drifted off E
C/A Tern - c. 150 os, most appeared Commons, gradually drifted off E or N
Arctic Tern - 1 os amongst Commic flock (CRJ)
Sandwich Tern - 10E, 12 os gradually drifted off E
Med Gull - 1E
Swallow - 4N
Also of note, at least three Herring Gull nests were located on houses immediately behind the beach at the Bill (Seal Road) and it is quite possible there are more, which as far as I'm aware is a fairly recent development (unless anyone knows better). (OM). 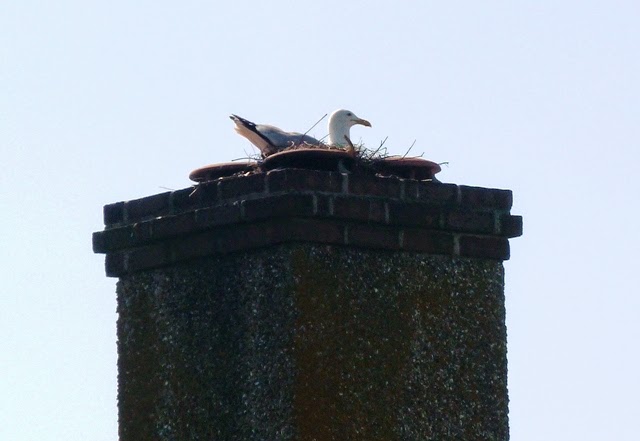 Nesting Herring Gull at the Bill (Seal Road) and below a crazy pair of Shelduck that seem to have become temporarily resident, spending much time on the beach and shoreline (OM). 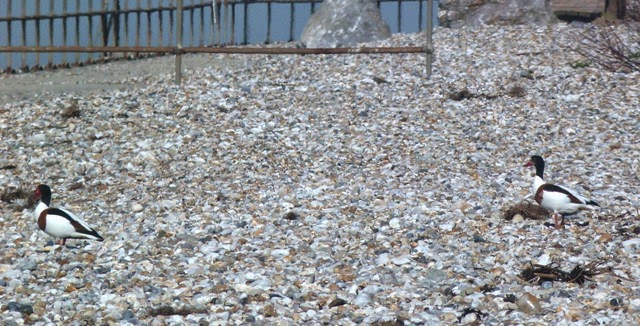 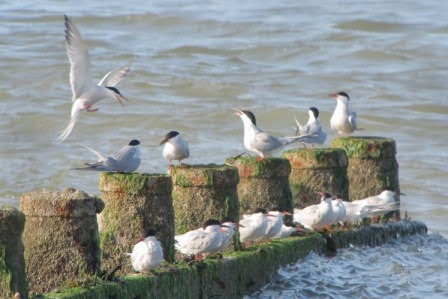 Common Terns at the Bill (above AH, below OM) 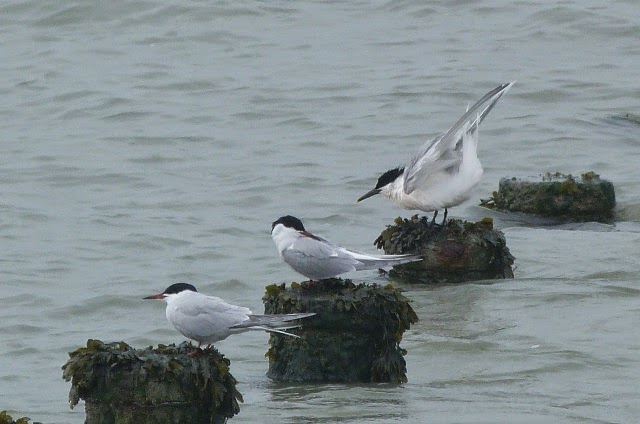 A return visit to Selsey Bill at teatime produced no evidence of movement in the freshening southerly wind, save the terns returning to the shingle spit on the dropping tide, and the female Eider that seems to have taken up residence close inshore. (AH) 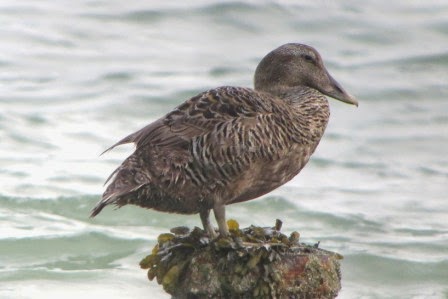 Eider at the Bill (AH)
﻿
Church Norton: Quiet this morning - highlights were a Cuckoo and a number of singing Sedge Warblers and Whitethroats along the Severals, half a dozen Whimbrel in the harbour and a few Common and Little Terns towards the harbour mouth. (AH) 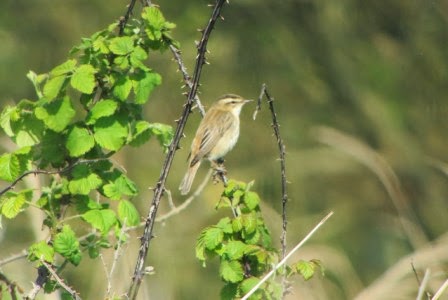 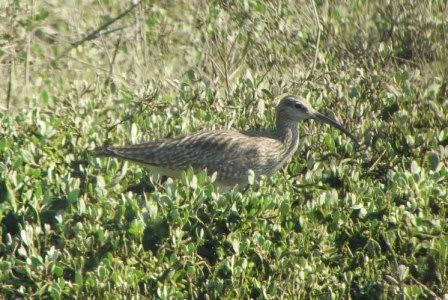 Ferry Pool: No sign of yesterday's Garganey, though 6 Gadwall, a female Wigeon and 3 drake Shovelers present along with 70 Black-tailed Godwits in assorted plumages. (AH) 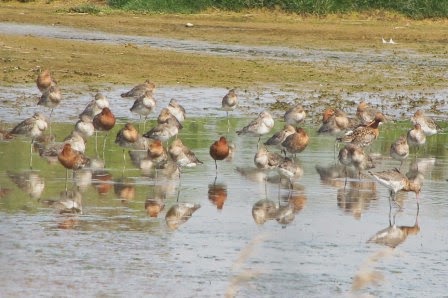 Black-tailed Godwits on the Ferry (AH)


North Wall: Little evidence of an overnight migrant fall. Good news is that the pair of Great Crested Grebes have returned to the Breech Pool and the number of Tufted Ducks there has increased to 16, still squabbling. Three Greylag and 2 Canada Geese in back field. I counted 8 Sedge Warblers along the Wall. Cetti's Warblers have spread far and wide from their North Wall stronghold, they now feature in many locations across the fields. I recorded 14 this morning. A flock of 17 Whimbrel were feeding up near Honer Farm where there was a Cuckoo calling. Common Whitethroats are everywhere. A pair of Little Owls had found a sunny branch to sit out on. The Little Grebes and chick were seen last evening. (JW). 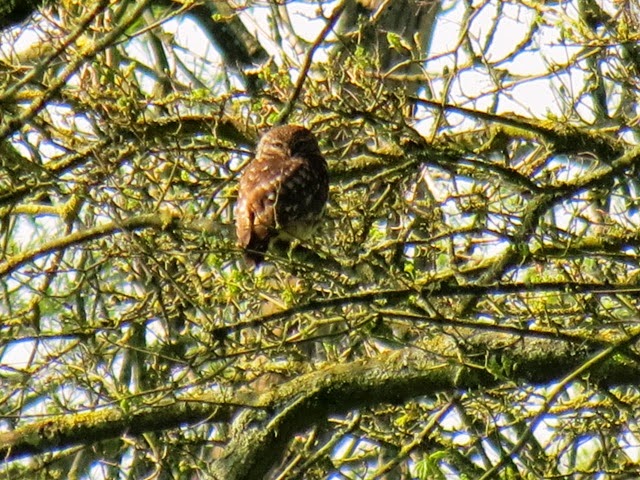 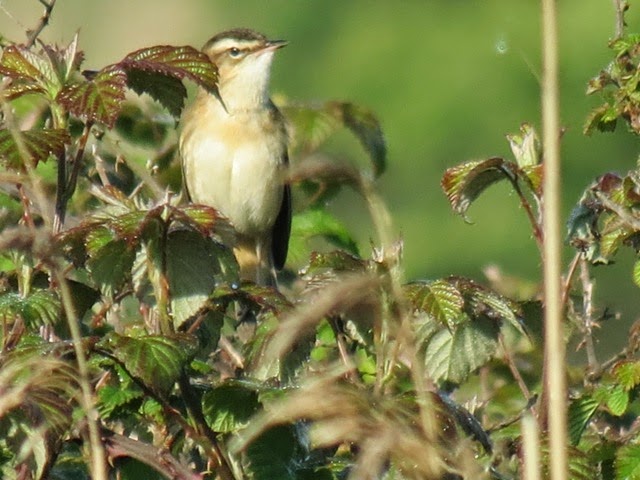 Chichester Gravel Pits: This afternoon there were 38 Common Terns on Westhampnett Pit (14 dip-feeding & 24 sat on a raft), and a further 14 on Ivy Lake. (AH)
Tuesday, 29th April: Another generally windless day, grey to start, but brightening up and becoming quite warm; despite some dense cloud the predicted heavy showers did not appear and it remained dry. Slow at the Bill again and most of us still remain Pom-less despite events elsewhere. Sea passage remains minimal, but a few migrants were to be seen, then early afternoon brought news of the bird of the day - a Black-winged Stilt at Medmerry - thanks Paul!

Medmerry: Earnley Flood Pools - Paul Stent found a Black-winged Stilt, which after giving everyone the run-around, finally settled on the 'Avocet' Pool on the far south-west of the reserve. Also at least 6 Avocets, a pair of Little Ringed Plovers, several Wheatears, a Cuckoo and a Redstart (AH/OM). 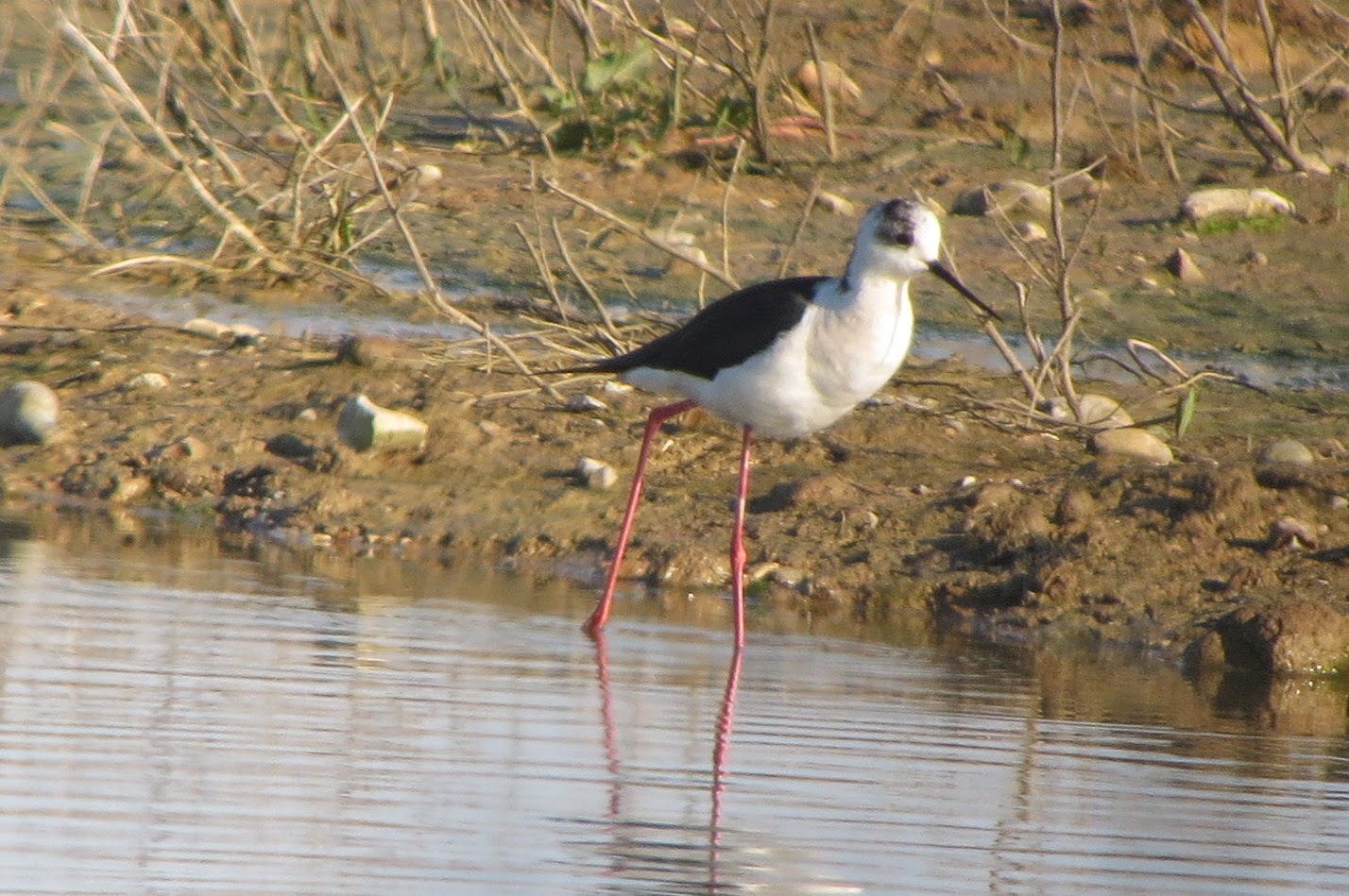 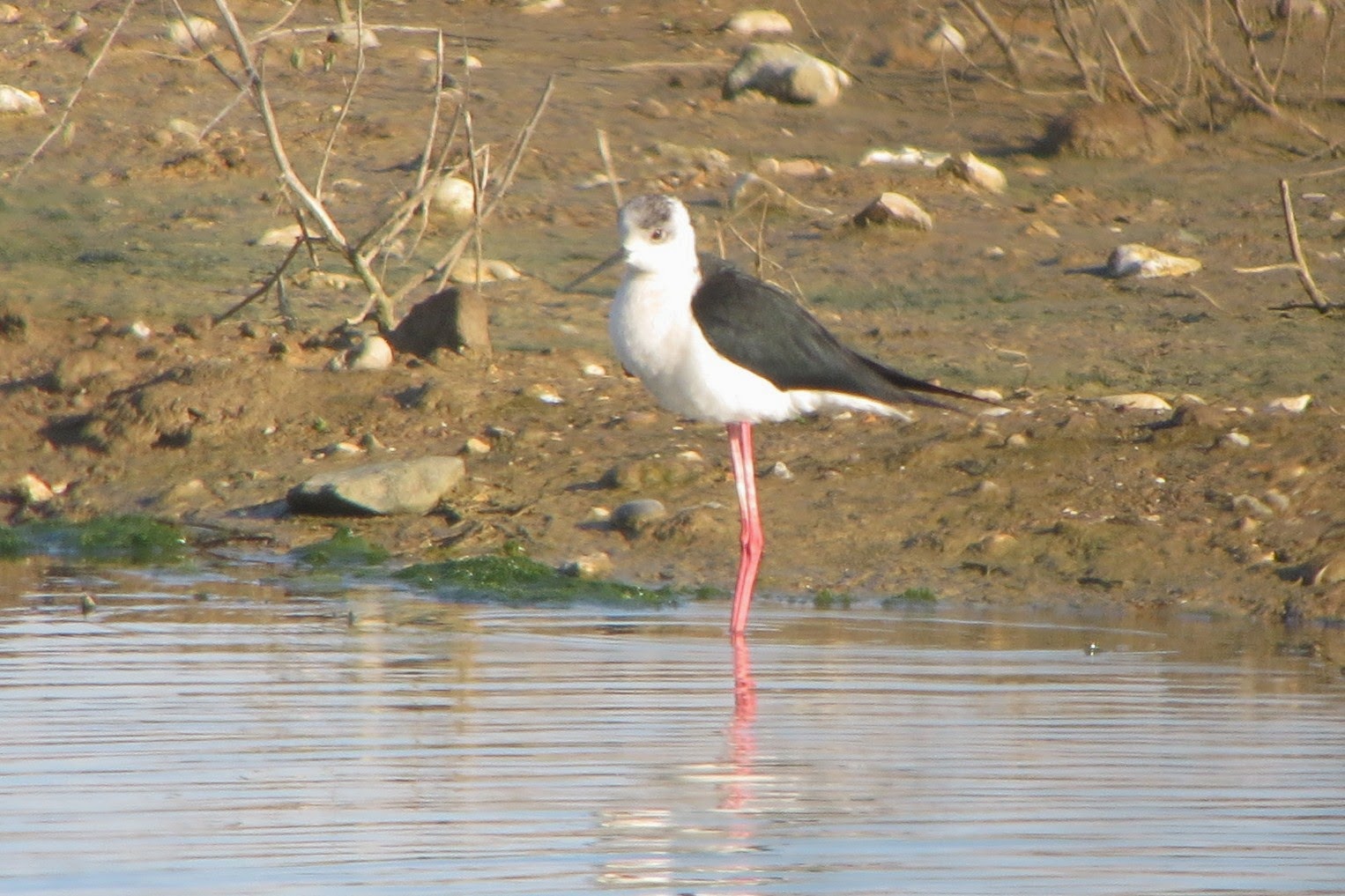 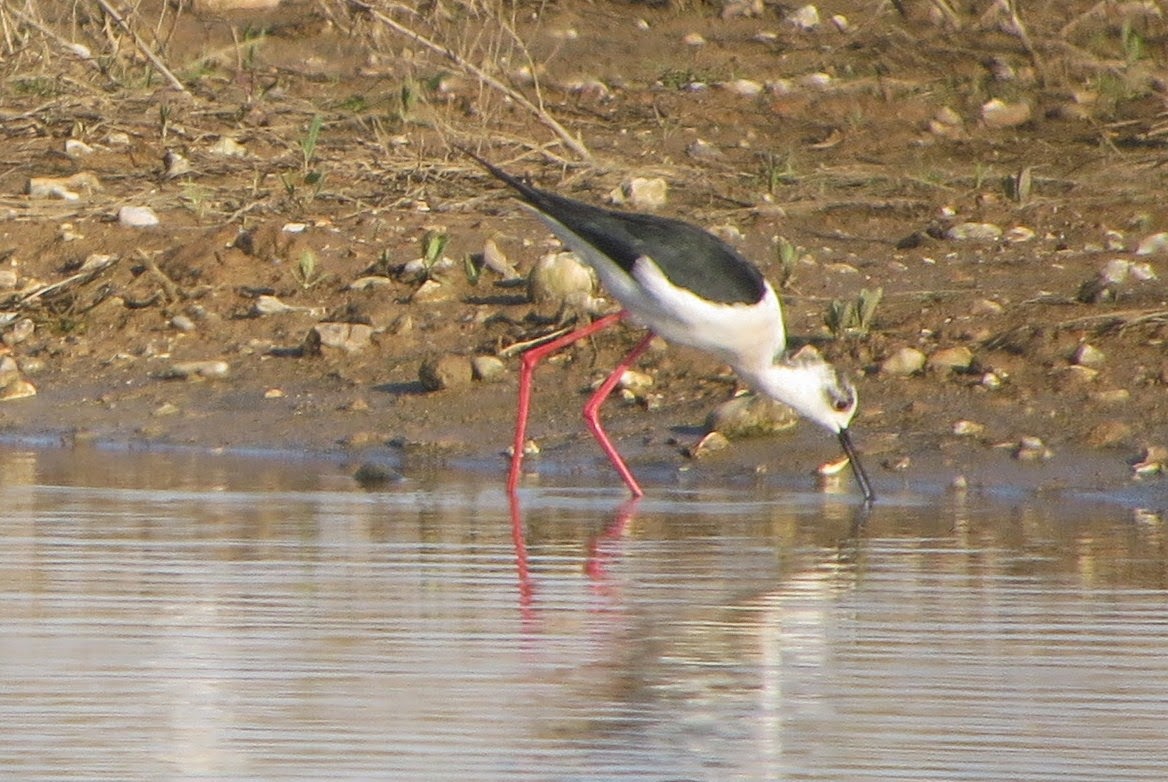 Ferry Pool: a drake Garganey this afternoon (per IL).

Pagham Spit and Lagoon: The Iceland Gull still present and beginning to look like it might summer with the other immature gulls on the Lagoon.
A male Whinchat was the only migrant on the spit, and waders were few and far between, too - 20 Dunlin, 2 Bar-tailed Godwits and half a dozen each of Whimbrel and Grey Plover being the total. Best of all, though, at least 20 Little Terns around the harbour mouth with similar of Common Tern and a few Sandwich Terns.(AH) 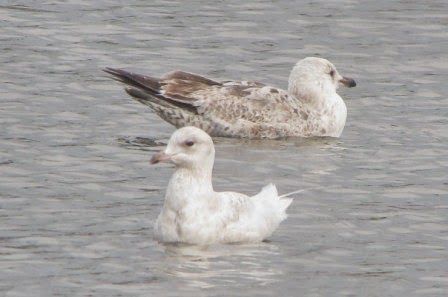 Iceland Gull with Herring Gull on the Lagoon (AH) 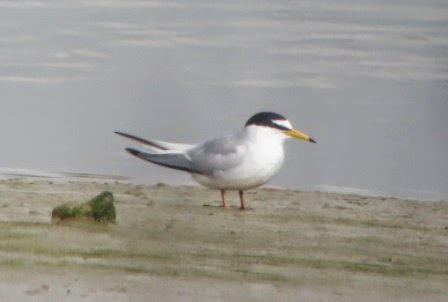 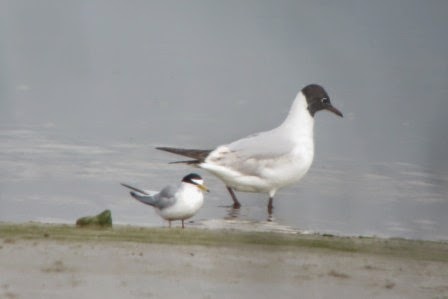 North Wall: A Common Sandpiper in White's Creek before the tide came up. (PC) 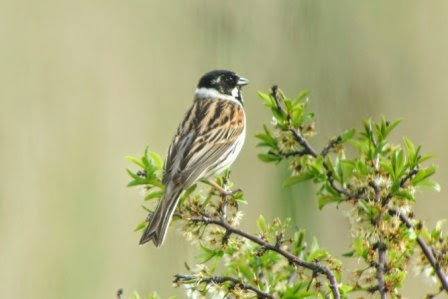 Reed Bunting (above) & Whinchat on the Breach Pool (AH) 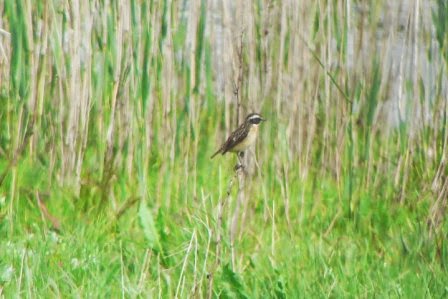