Wednesday, 9th April: Another bright morning, sunny and pleasant with the wind lighter but still from the west; although things appeared predictably quiet this morning, the Peninsula's first Cuckoo of the spring was recorded....and later the first Little Tern appeared at the Bill.  Two Spoonbills were in the harbour from the North Wall. Also noteworthy was a pod of 5 Harbour Porpoises off the Bill  for a couple of hours early afternoon.

Medmerry: The first Cuckoo of the spring heard here this morning, and also a Swallow and a House Martin over (Pete Hughes).


Church Norton: Less birds than yesterday - a walk down the west side produced couple of Swallows and Sand Martins up through the harbour, just a few Chiffchaffs, Willow Warblers and Blackcaps, a dozen Linnets, a male Reed Bunting, a pair of Buzzards tussling with the local Crows, and about 40 Curlews in the harbour. Also the first Speckled Wood butterfly I've seen this spring. (AH) An evening walk (1800hrs) from Park Farm Selsey to Church Norton was fairly productive:Redstart - 1 (female), Swallow - 1, Wheatear - 1, Sedge Warbler - 1 (Severals), Chiffchaff - several, Cetti's Warbler - 3, Sparrowhawk - 1, Kestrel - 1, Sandwich Tern - 12 (S&SaH). 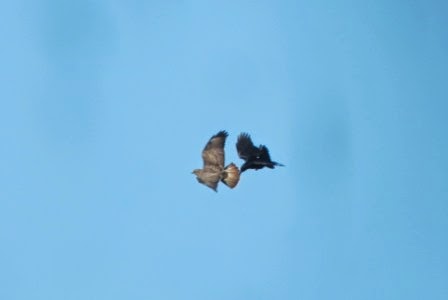 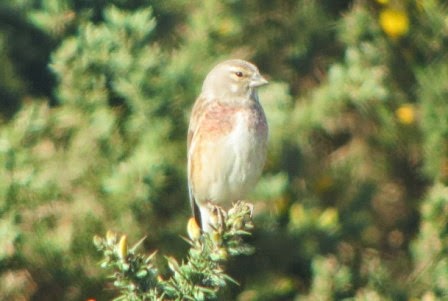 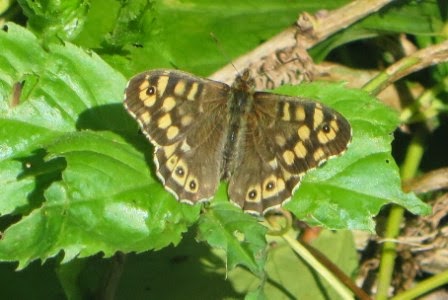 Ferry Pool: The three pairs of Avocet are still in residence. Tufted Duck numbers have risen to 22 birds this morning, and there were also 5 Gadwall, a couple of pairs of Wigeon, 20+ Shoveler & Teal, 40+ Shelduck and several pairs of Lapwing & Redshank. (AH) 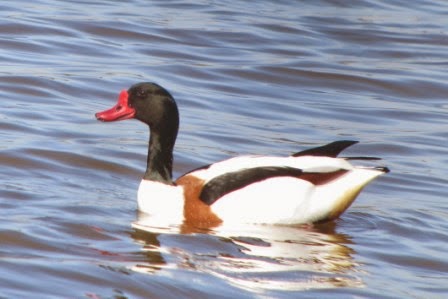 Drake Shelduck on the Ferry (AH)
North Wall/Fields: Nice sunny morning. On the Breech Pool 221 Black-tailed Godwits and 2 Spotted Redshanks. Two Spoonbills in the Harbour. Honer reservoir was devoid of bird life but there were 62 Mute Swans in the field behind. A Common Snipe along Bremere Rife. Around Marsh Farm were some 600 Black-headed Gulls and 207 Curlew. Plenty of Chiffchaffs singing away but no other migrants. Must have seen over 20 Small Tortoiseshell butterflies with much lower numbers of Peacock, Brimstone and Orange Tips. The 3 Roe Deer were at Bramber Farm. (JW). 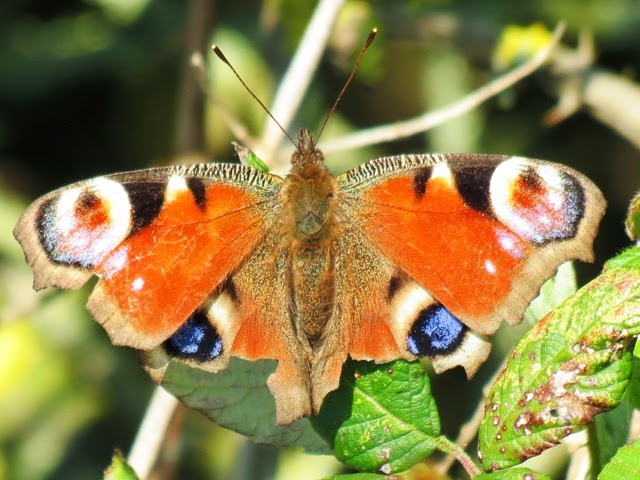 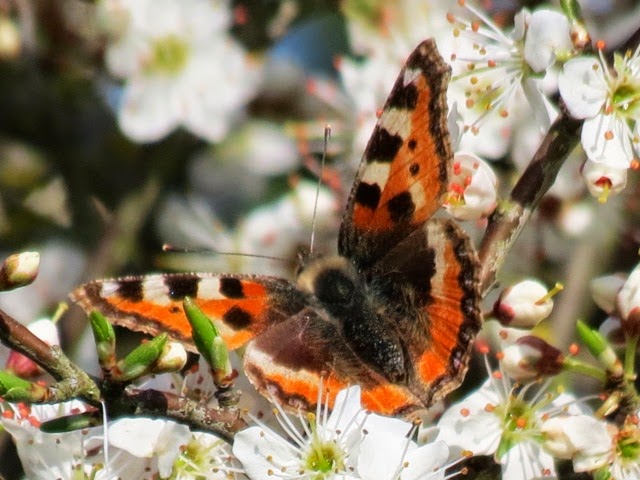 Peacock (above) and Small Tortoiseshell butterflies at the North Wall (JW)
Tuesday, 8th April: A bright and breezy morning with a brisk westerly wind - never the best for sea-watching, and so it proved, though, as ever there was something of interest.....


Church Norton: Some slight evidence of migration - a couple of Wheatears on the beach, a couple of Swallows and up to half a dozen Willow Warblers around the hide area, along with  3 Cetti's Warblers, a Jay, a few Chiffchaffs and at least ten Blackcaps. There were also two Lesser Black-backed Gulls in the harbour, and 4 Buzzards and 2 Sparrowhawks displaying over the Priory. (AH) Additionally, two bursts of calling from the Nuthatch were heard early on, fairly distantly from the horsefield end of Norton Priory (OM). Also a later report of a Spoonbill flying over this part of the harbour (per SOS). 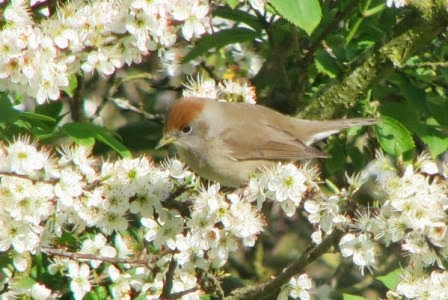 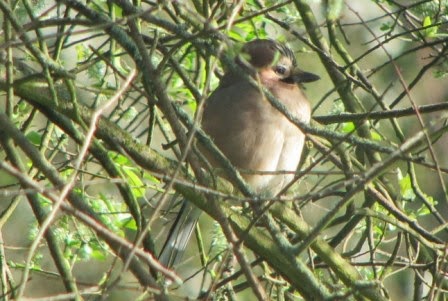 North Wall: A brisk W wind made it feel very un-spring like but the signs were there - a Swallow behind Owl Copse, Skylarks singing on high near Marsh Farm and the first bluebells out. White's Creek was like a wind tunnel and not a bird could be seen. The Breech Pool hosted 207 Black-tailed Godwits, many in fine red brick plumage; also there a few Teal and Tufted Ducks and a Little Grebe. At Marsh Farm there were 22 Little Egrets and 2 Grey Herons hunkered up against the wind. Lots of 'gargling' emitting from Owl Copse. The Little Grebes there are still on the nest although the recent rise in water has made it look somewhat precarious. Three Roe Deer in Owl Copse. (JW). 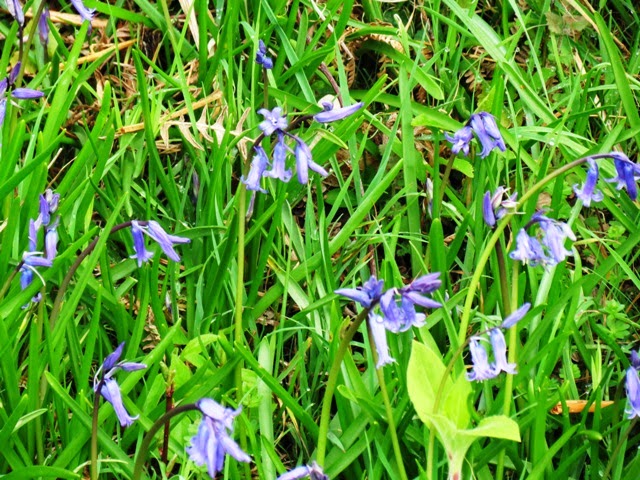 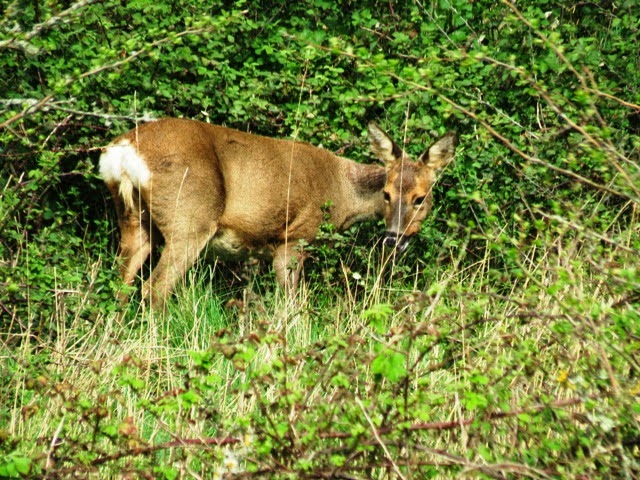 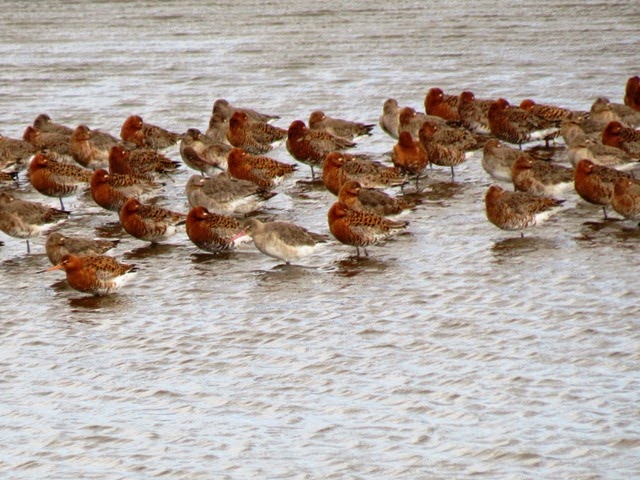 
Medmerry: Caravan Park end - 28 Linnets on the rough ground, 1 Ringed Plover tucked in to the shingle bank by the revetment, 1 'left behind' Brent Goose enjoying fresh grass on the embankment, 2 Med. Gulls amongst c150 Herring and Black-Headed Gulls on the new pools, and 12 Lapwings (SR) 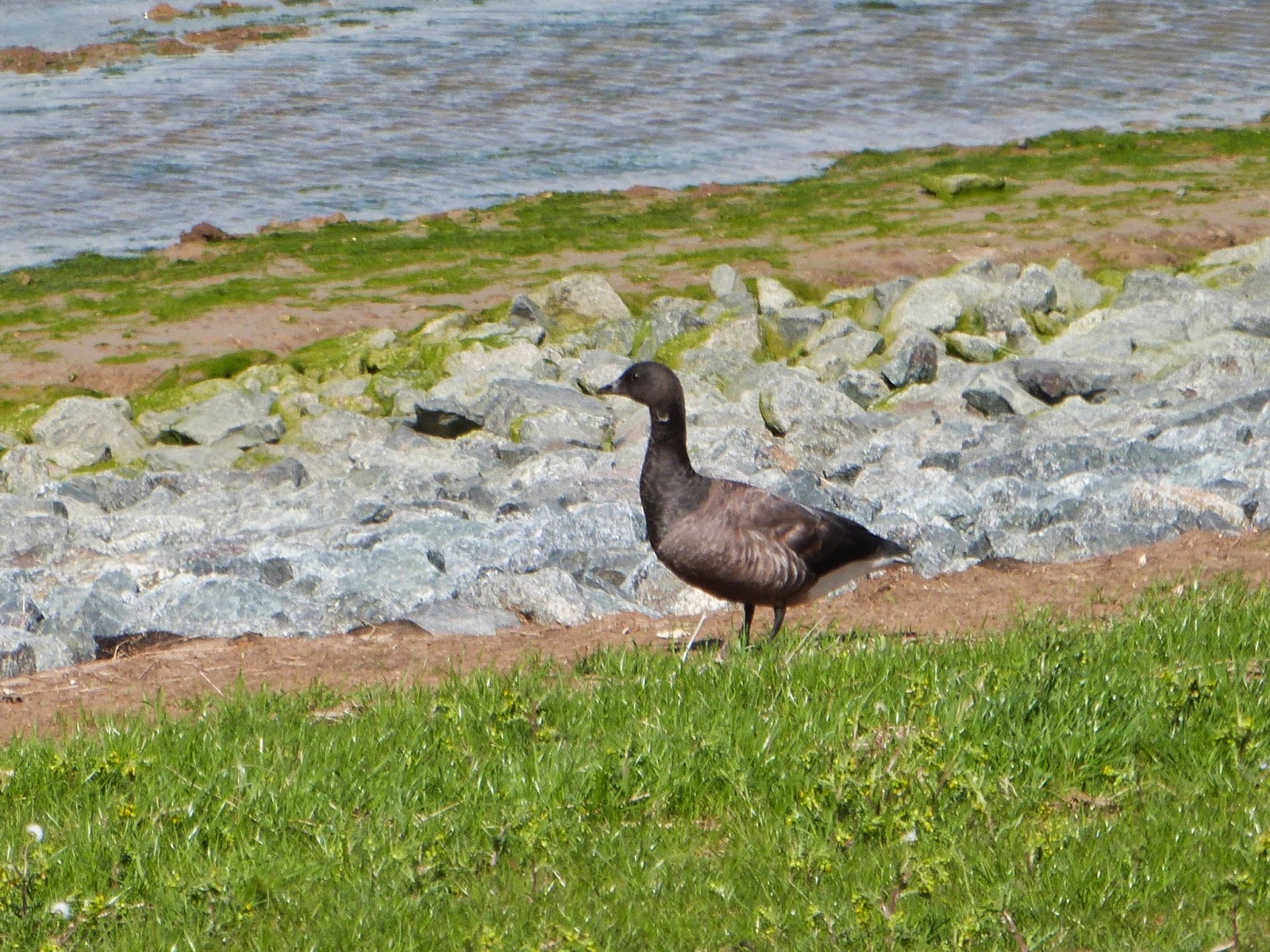 Lone Brent Goose on Medmerry embankment (SR)
Chi GP's: Westhampnett pit: A Common Tern was present amongst the gull flock on the pit at noon (B. Ives)

Monday, 7th April: As was forecast, a wet morning with a fresh SSW wind, the wind becoming more westerly later with continuing rain. With both blog authors away from the Peninsula most of today, and other regulars either looking elsewhere or not going out, it has all the hallmarks of a slow news day. Time then for a bit of day-dreaming about Pom Skuas. Former patch regular and now Welsh resident Mervyn Jones will be well known to many of those who have watched at the Bill over the years, and for a bit of fun he recently contacted our log-keeper JA, concerning the best day to plan his next visit by using a Pom Probability Chart. The following may therefore be of interest ................


A good many years ago Chris Janman and I, for a bit of fun, knocked up a POM PROBABILITY chart which showed date, wind direction and number of Poms seen. This was for the whole Sussex coastline and showed that the 7th May was the best date to see a Pom in Sussex, so it became known as National Pom day!
I have been gone from the Bill 12 years now (hard to believe) and have not seen a decent flock, or even a Pom, in the last 5 years so have timed my visits wrong. I know temp’s of over 70 with high pressure bring flocks, but as you’ve kept the Bill records over the last 10 years you may be able to see if there is a BEST date for the Bill over this period, as it seems to me Poms are coming earlier in the Spring. We used to have a bit of fun making predictions as you lot still do, so an Atkinson Pom Probability Chart to replace the Janman/ Jones chart may be good fun and may tell me the best date to come down next time. Hope you all have a great spring, I still miss it and look at the blog every day. Regards, Mervyn.

Although the date that has had the most Poms (64) in the last ten years is the 7th May (so that is still counting for something), the obvious peak is between the 30th April and 4th May, with a smaller peak on 25th to 26th April. Just based on dates and figures, I would say that the best day to see Poms is the 2nd May.

Hardly any birds seen in rain (this will suit you Merv!).

So clearly east in the wind (as we know) gives a much better chance and in recent years north-east has been better than south-east, although this could be related to the lack of decent south-east winds.
In some ways there are just too many variables to work out the ‘perfect day’, but all things considered, a north-east force 3-4, with a mixture of sun & cloud on the 2nd May gives you the best chance. Don’t shoot me if they all come through on the 14th! Alternatively, any day at the end of April or the start of May, when Owen is present but has gone on a toilet break, normally produces a few! Regards, Justin            (end).
Selsey Bill 1600 to 1730hrs: Rain/showers, cloud. Wind S3  (Obs: SH)
Great Northern Diver - 7 os
Red-throated Diver - 2E
Common Scoter - 32E, 15os
R/b Merganser - 2E
Gannet - 1E,1W
Turnstone - 4 ob
Common Tern - 1E
Sandwich Tern - 18E, 5W

Ferry Pool: The 6 Avocets were still present today, with reducing numbers of the regular wildfowl.(IL).
Of interest, IL forwarded a couple of photos of an interesting gull on the Ferry, which are attached  below - courtesy of Dick Senior (taken 26/3/14). The ID is uncertain though Kumlein's was one possibility being considered - but  there appears too much dark in the wing tips - so any comments welcome. It is thought to still be in the area. (IL). 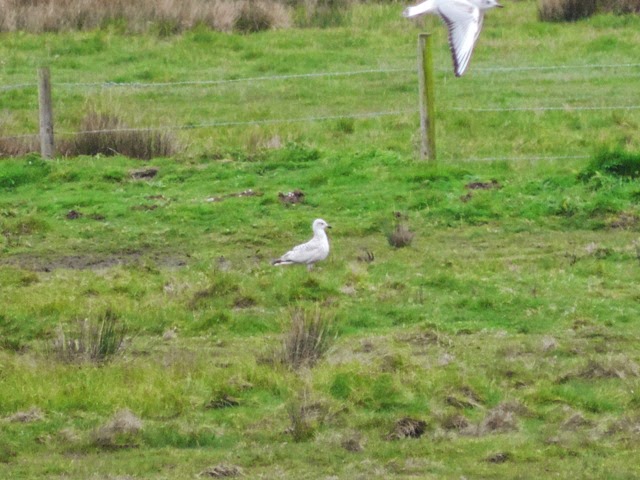 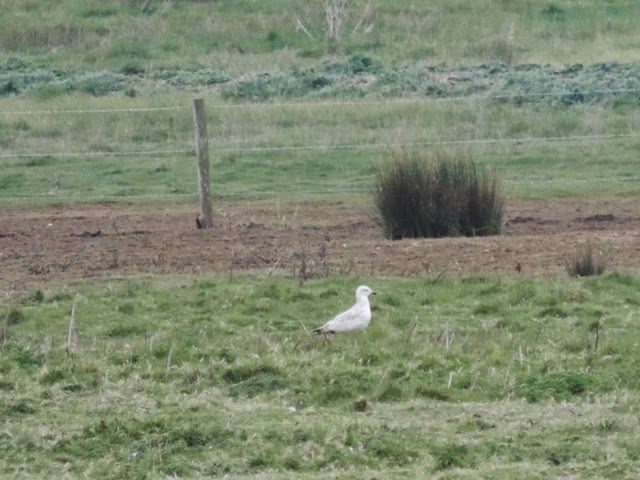