Sunday, 6th April: Cloudy and grey with a fresh W/SW wind, not the most promising of conditions for migrant activity, but you never know... meanwhile we start with a couple of late news updates:
Thurs 3rd: The Iceland Gull was still on the Lagoon and 2 Wheatears on Pagham Spit (DSF/ARK).
Sat 5th: This afternoon we had two Avocets copulating on the Ferry Pool, a Sedge Warbler singing on the Long Pool, a Spotted Redshank going into summer plumage at the end of Ferry Channel and at about 1430 an Arctic Skua gave us a five minute display of bullying gulls at the Bill (M & K Galtry).
On with today's news ........... 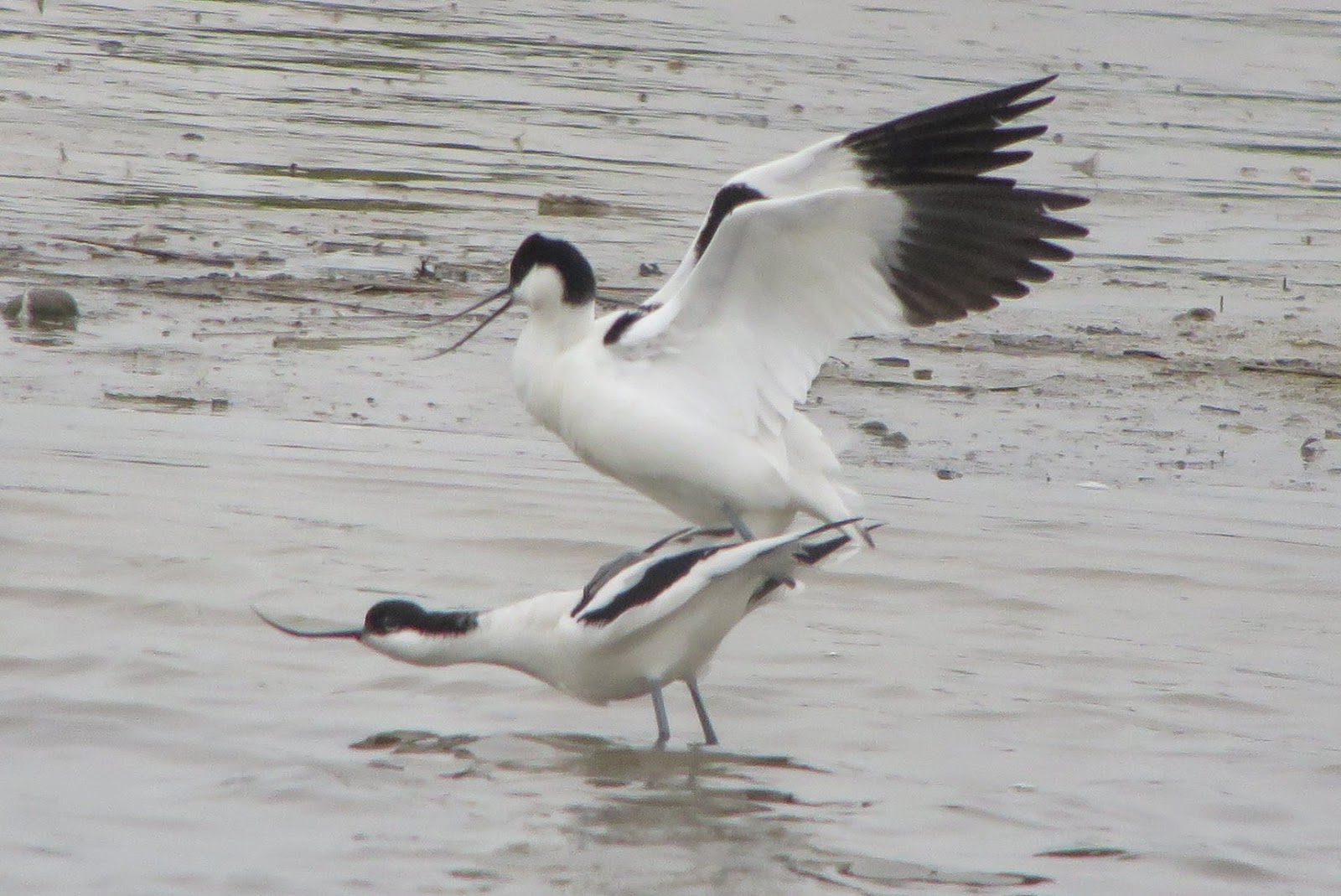 Mating Avocets on the Ferry (AH)
A walk from east Selsey to Church Norton at around noon produced 2 Gannets,  8 R/b Mergansers and 8 Sandwich Terns offshore, plus a Buzzard, 5 Cettis's Warblers, several Chiffchaffs and a Blackcap in the area and 3 Swallows arriving from the sea (SH).


Saturday, 5th April: Mainly cloudy with an occasional hint of brightness but a rather cool SSW wind. It was slow going at the Bill, whilst early reports indicate that overnight migrants were few, though a male Redstart at Church Norton was a bonus.

Church Norton: A quick look round Church Norton early on produced a nice male Common Redstart in the churchyard, but not much else of note. CN/CRJ failed to relocate it there, but did find it or another along the Long Pool sometime later. CRJ also had the Nuthatch singing and calling from one of the pines in the churchyard. AH) 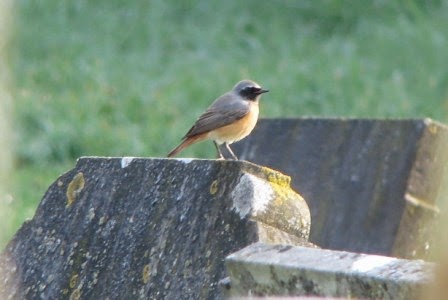 Pagham Hbr: North Wall: Several singing Chiffchaffs and up to 4 Cetti's Warblers were readily obvious, but a single Wheatear was the only new migrant I could find, and the often-elusive Water Pipits failed to put in an appearance this morning at the Breech Pool, which held a flock of c.70 Black-tailed Godwits, 4 Wigeon and 12 Teal. Along White's Creek and the East side were 2 Wigeon, 2 Knot, 42 Grey Plover and 30 Dunlin, plus a large flock of c.75 Linnets which flew over from the Slipe Field. I ran into AH who was leading an outing, but he had done little better than me (OM).
The only thing to add was a single Sand Martin over the Lagoon, though 2 Spoonbills were reported briefly in the harbour this afternoon before flying off again and up to 5 Spotted Redshanks in the North Wall/Halsey's area (by M Daniel / SOS). (AH) 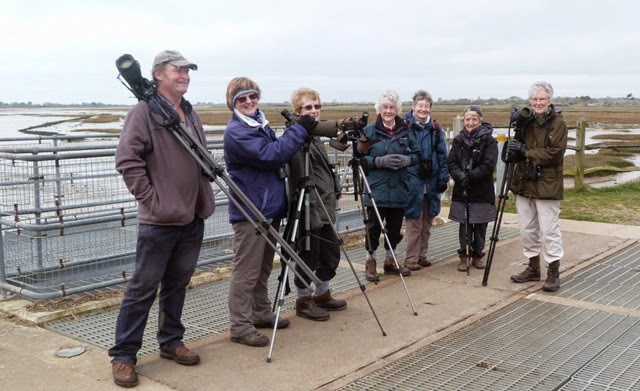 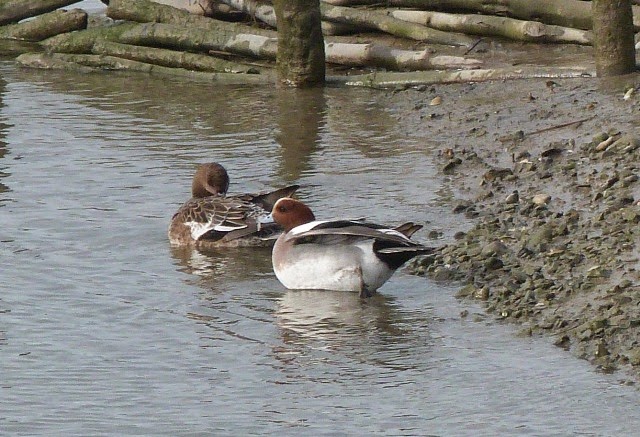 This pair of Wigeon were the only birds present in White's Creek when I arrived (OM). 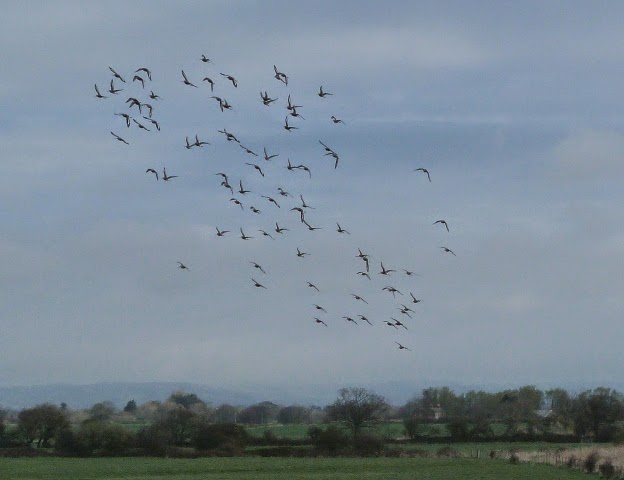 The flock of c.70 Black-tailed Godwits in flight over the North Fields, and below part of the flock on the Breech Pool (OM).

Friday, 4th April: With the wind swinging back round to the west it was a predictably quiet start to the morning, with the regulars at the Bill - almost all of whom contrived to miss yesterday's star goose - in search of a bit of counselling and group-therapy! Early April days at the Bill usually see the appearance of some of the Hampshire regulars, so it was nice to welcome John Faithfull back for his first appearance over the border this spring. 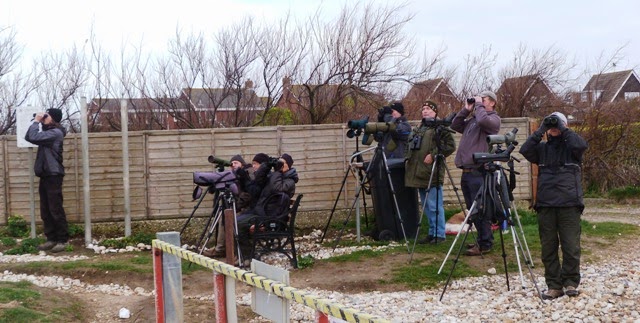 (above) Following a general shift in the wind from E to W, this morning's gallery was assembled around the bench to seek shelter, rather than the favoured south-east corner of recent days. (below) John Faithfull in action (or should it be inaction?) on his first Bill visit of the year - accompanied by his Faithfull sidekick Sam (clever, eh?). Sam is also a regular, on his 14th year of visits, hence the excitement shown! (OM). 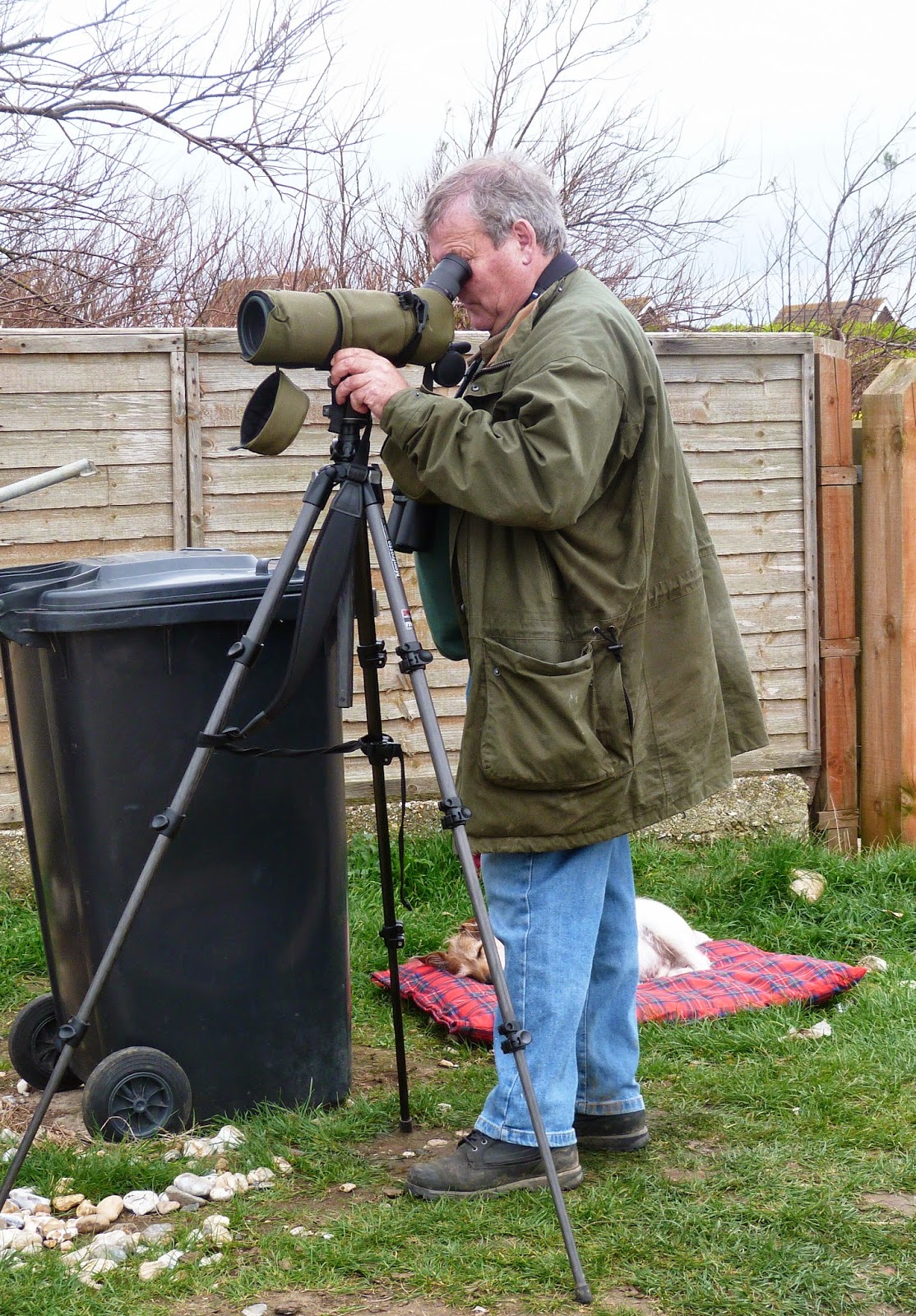 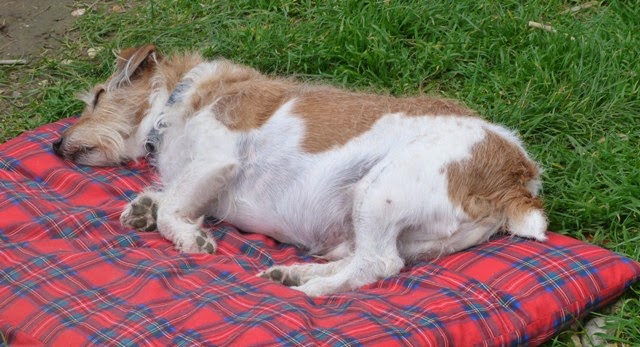 Selsey: My first Swallow of the year headed NE along East Beach this morning, Park Lane had 1 Wheatear, 1 Kestrel, 2 Red-legged Partridges, a singing Song Thrush, and a few Chiffchaffs (SR).


Church Norton: The elusive Nuthatch put in a appearance in the pines in the car-park (per George Kinnard), but otherwise it was pretty unchanged from recent days - a few Chiffchaffs and Blackcaps singing intermittently, a few Linnets and Goldfinches around, 30+ Curlew in the harbour and up to a dozen Red-breasted Mergansers on the sea.
Birdguides report the Long-tailed Duck as offshore again, and (presumably the Greenlease Farm) Black Redstart as still present. (AH) Ivan Lang later reported a Spoonbill over and a couple of very early Tree Pipits (IL). 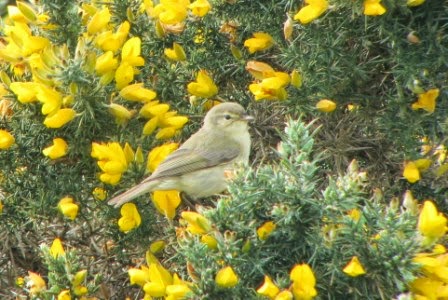 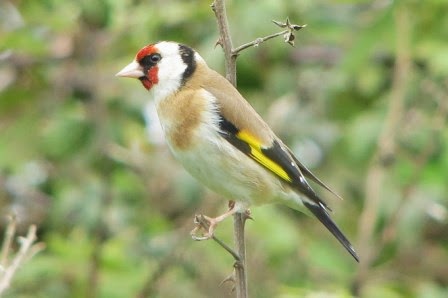 Medmerry: (Easton Lane - Bracklesham beach) - A single Little Ringed Plover was the best bird on offer when I visited, and a Swallow flew over. On and around the pools were 34 Teal, a pair of Gadwall, 12 Tufted Duck, 16 Shelduck and 14 Curlew. Also logged were three flocks of Linnets totalling 80+ birds, 2 Yellowhammers, a Skylark, a Meadow Pipit and a Common Buzzard. (OM).
Posted by Andrew House at 12:18