Thursday, 3rd April: The prevailing E/SE winds, usually productive for sea-watching along the south coast,  are forecast to slip away later today, to be replaced by more westerly-based winds from the Atlantic. It couldn't last of course but let's just hope we haven't used up all of our south-easterly allowance for the spring!
Morning update .... Dave Smith phoned to tell me of a Red-breasted Goose east past the Bill at 9.30am with Brents. It's really hurting yours truly to write this at present, for I'm feeling pig-sick at missing it, as my most wanted Bill tick escapes me for the second time! Having been reminded by my good lady of a social commitment I didn't want, I decided to stay home today and earn some Brownie points..... after all I've done several long sea-watches this week and I surely won't miss too much I reasoned...but what's worse is that I could have got three hours Bill-watching in but decided against the Peninsula traffic for so little birding time. Well in the end I've paid the price for domestic bliss...and sorry about the expletive Dave, but come on ref, there's no justice! (OM). Not my day... seems my email hacked so if you get any odd/dodgy messages purporting to be from me, please ignore, don't open. Taking necessary steps, should be ok soon. OM

Selsey Bill: As can be seen above, the star bird eluded OM, but also myself too, and by a matter of minutes, as I left the Bill a shade too early! Otherwise it was fairly average but with a bit of variety - a few Brent Geese and Common Terns moving east, the Long-tailed Duck again early on and a few lingering Common Scoter, Sandwich Terns and Great Northern Divers offshore. There were a few Swallows and a Hobby in off the sea and a White Wagtail on the beach. (AH)
The full log appears below (with thanks to PM)... 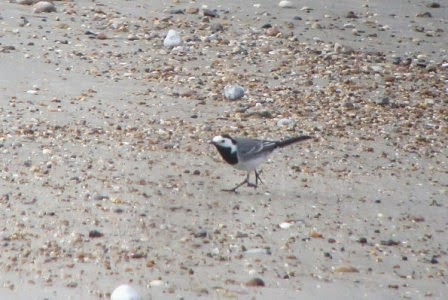 ﻿
Church Norton: Still quiet - a pair of Mistle Thrushes in Rectory Lane, and a few Chiffchaffs and Blackcaps was about the sum. (AH)


Ferry Pool: 7 Avocets this morning, plus 6 Gadwall and a pair of Skylarks. (AH)

North Wall: The Water Pipit was still present, but as elusive as ever in the base of the reeds. Also present there were a Common Snipe, 65 Black-tailed Godwit, 30 Teal and 12 Linnets over. (AH) Later on, another Water Pipit joined the first bird, and  quite a few people eventually managed to see both. Also 2 Snipe and a Spotted Redshank were present. (CRJ). 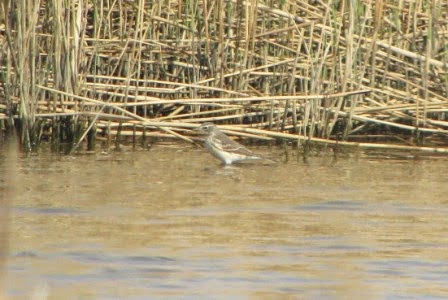 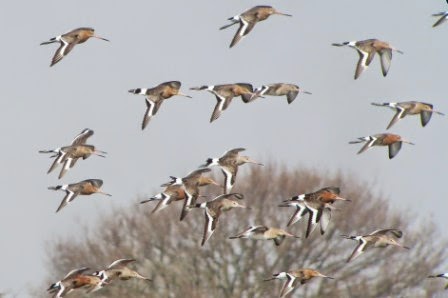 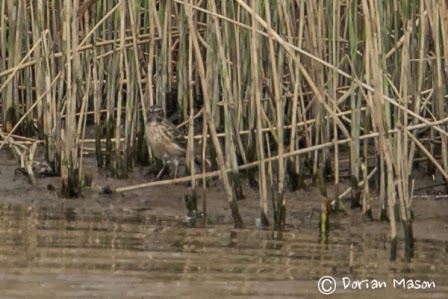 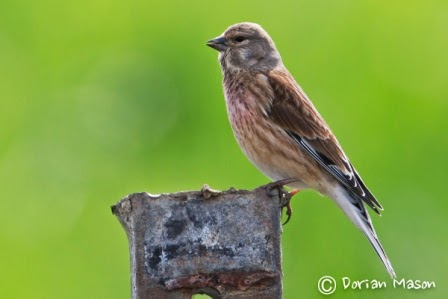 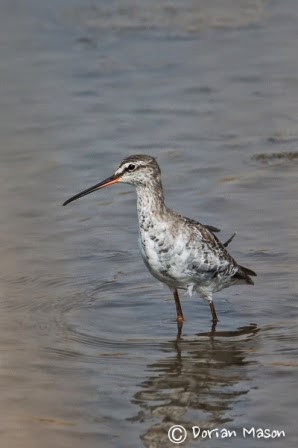 Wednesday, 2nd April: A grey and fairly chilly morning with a brisk ESE wind and just a few spots of rain. Conditions were also rather hazy; doubtless some of this was due to the high levels of atmospheric pollution currently visited upon us from Europe and also dust from the Sahara, courtesy of the wind direction. Talking of visiting, this morning one of the old Selsey stalwarts paid us a visit - Dave Flumm. It must be a good many years since Dave last watched at the Bill, and he commented on how Selsey had changed in the intervening years, but true to form he left his B&B early and was first to start today's sea-watch, arriving at 0615!! He now resides in Cornwall, but for those unfamiliar with his name from early Selsey days, he is more widely known as the RSPB warden at Hayle and Marizion in the aforementioned county. We look forward to your next visit Dave.
At the Bill there was a steady if unspectacular passage - highlights being a Long-tailed Duck and 3 Avocets early on, 3 Common Terns, some movement of Common Scoters and Sandwich Terns east and 8 Swallows arriving. Full log below...
Selsey Bill 0615-1315hrs: Grey, cloudy, quite cool, wind ESE 3-4 with a few spots of rain.
(Obs: DSF/CRJ/GH/OM/AH/C&ME/DS)
Great Northern Diver - 5 os
Black-throated Diver - 2E
Diver sp - 1E
Great Crested Grebe - 1 os
Brent Goose - 21E
Shelduck - 1E
Common Scoter - 240E
R/b Merganser - 7E, 10 os
Long-tailed Duck - 1E
Shoveler - 26E
Wigeon - 1E
Fulmar - 2E, 5W
Gannet - 18E, 1W
Avocet - 3E
Curlew - 1E
Oystercatcher - 14E (inc flock 10)
Kestrel - 1 in NE
Common Tern - 3E
Sandwich Tern - 66E
Black-headed Gull - 35E
Common Gull - 6E
Great Bk-backed Gull - 13E
Swallow - 8N
Linnet - 49 in NE
Meadow Pipit - 13N
Carrion Crow - 48 os on shingle bar 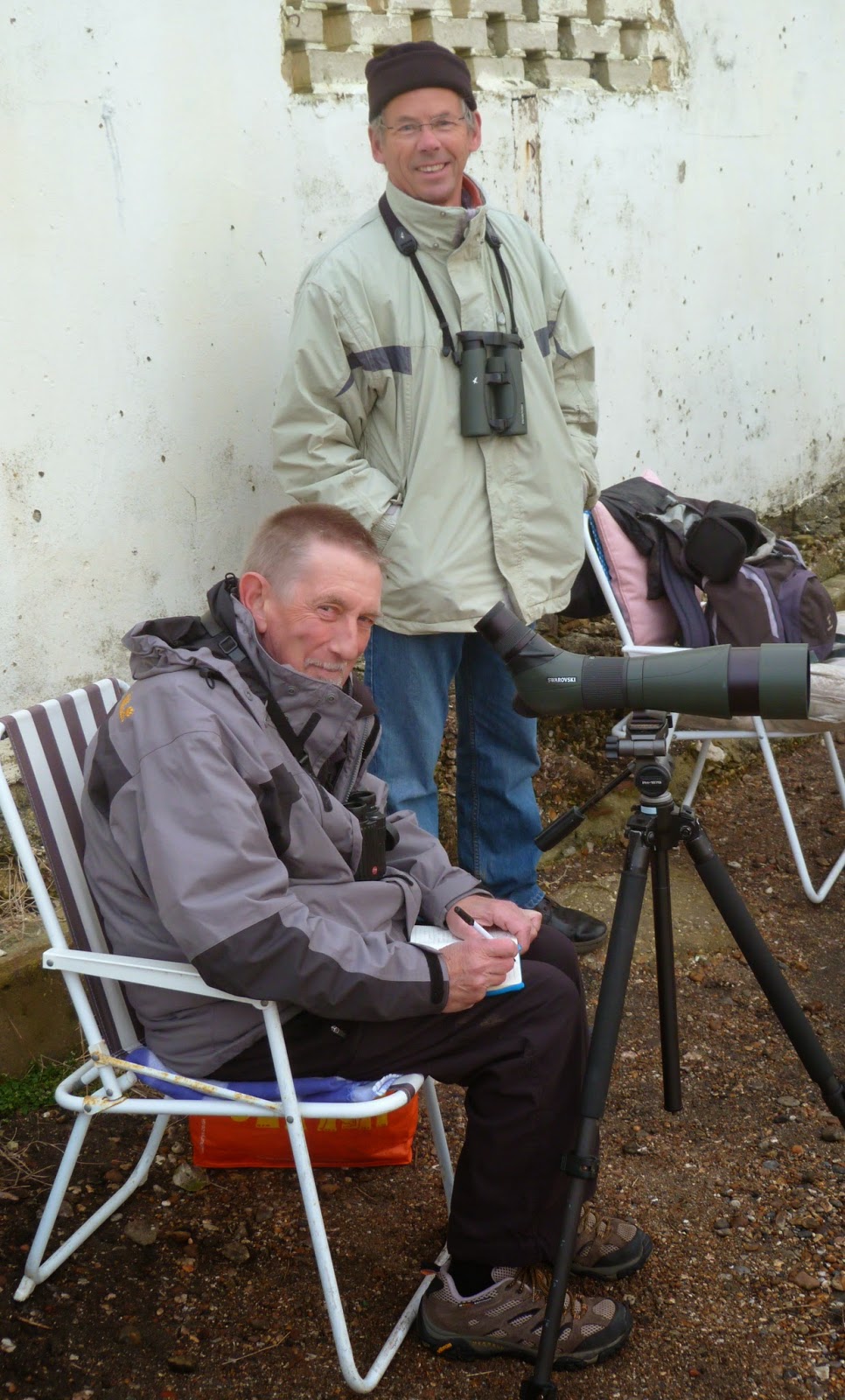 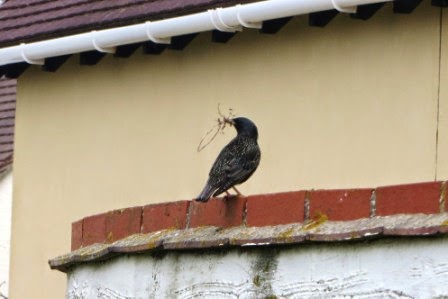 A Starling gathering nesting material at the Bill (AH)

Church Norton: Still quiet, with the birds keeping low in the chilly easterly. No sign of the Black Redstart in said wind, but still a few Chiffchaffs and Blackcaps singing, and also seen were a Mistle Thrush, a Sparrowhawk and a pair of Lapwings on the uncultivated land at Greenlease Farm. (AH) 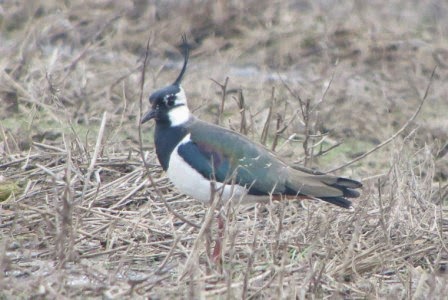 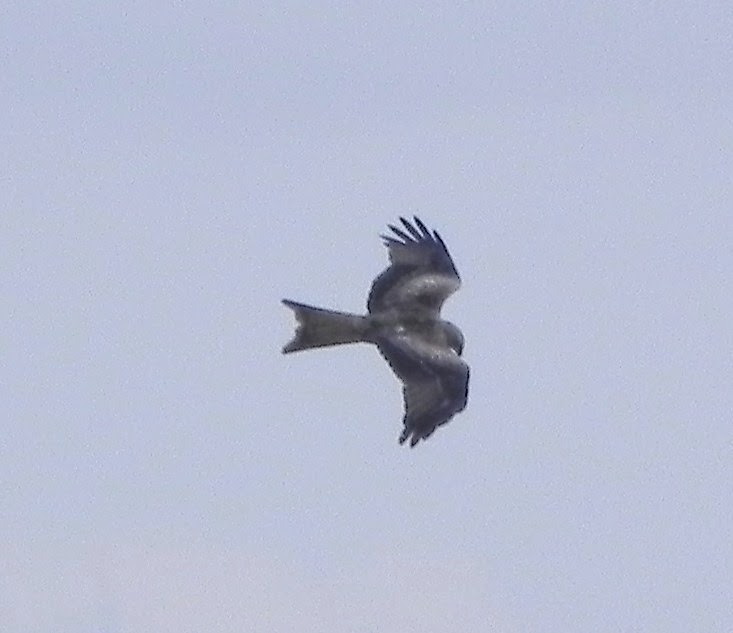 Red Kite over the North Wall (A. Kitson)


Chi GP's: An early afternoon visit to the Ivy Lake complex of pits proved to be surprisingly poor. Tufted Ducks were the default wildfowl species with a handful present on most pits. whilst a few Mallard and some noisy Greylags and Canada Geese made up the rest. I couldn't find a single hirundine, and other migrants were few, consisting of about 4 Blackcaps and half a dozen Chiffchaffs. Two singing Cetti's Warblers were also noted (OM).
Medmerry: An early evening look from the end of West Sands caravan park produced a Green Sandpiper on the flood between it and the new bank, at least 40 Linnets, 6 Meadow Pipits, 1 Grey Plover, several displaying Lapwings and Ringed Plovers, and 6 Shelduck. (AH)
Tuesday, 1st April: The weather played an April Fool's joke on us this morning, with dense fog engulfing the Peninsula till about 10am, then glorious sunshine and barely a breath of breeze. 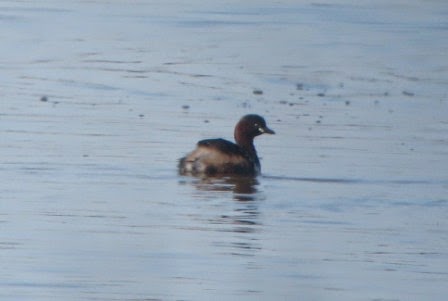 Little Grebe on the Ferry (AH)


Pagham Hbr: Church Norton: A few interesting things today - the Black Redstart was still at Greenlease Farm (SR), the elusive Nuthatch was flying around calling over the Priory when the sun came out, 4 Wheatears along the beach from Selsey (both GH), the Sedge Warbler was still at the southern end of the Long Pool along with a pair of Blackcaps and several Chiffchaffs and Reed Buntings, and along the beach 2 Sand Martins flew in off the sea, a Great Northern Diver was offshore (with another flying east) along with 15 Red-breasted Mergansers, and a single Common Scoter flew west (AH/GH). (AH)
At Greenlease Farm I also saw the Black Redstart just opposite the farmhouse, before it flew off over the thatched barn.  Also 1 Sparrowhawk, 1 Buzzard, 1 Blackcap, 1 Willow Warbler, 3 Red-legged Partridges, and a few calling Chiffchaffs. (SR). 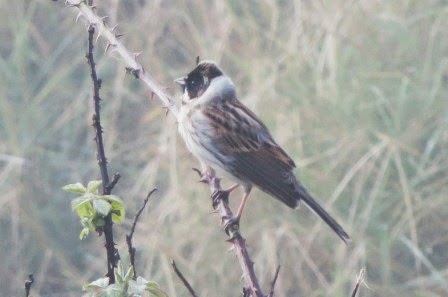