Pagham Hbr: Church Norton: Very little on the sea -  a close in female Eider and 4 Great Crested Grebes was all I could find. A female Red-breasted Merganser was in the harbour and a huge flock of Brent Geese dropped in, but otherwise nothing unusual. A Song Thrush was singing in the Priory. (AH) 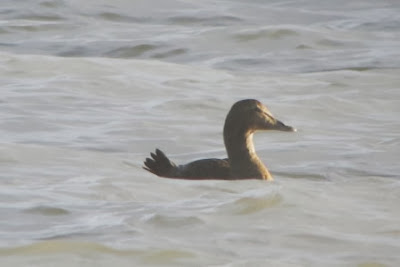 
Ferry Pool: The two Ruddy Shelduck were showing nicely this morning, along with 60 Common Shelduck, 40 Shoveler, 50+ Teal, at least 200 Wigeon and a single Gadwall. A Kingfisher was in Ferry Channel, as was a Red-breasted Merganser, and Trevor Gibson-Poole reported 8 singing Song Thrushes around Yeoman's Field. (AH) 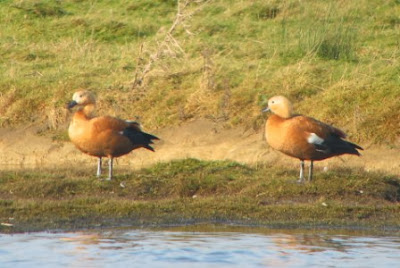 Ruddy Shelducks on the Ferry (AH) 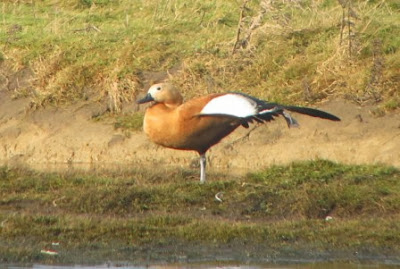 Sunday, 12th January: Not as sunny as anticipated but just about remaining dry through the day, though cool and windy.


Selsey Park Farm - Church Norton: I walked from near Park Farm to the edge of the harbour and back (1115-1345hrs) with Sam and Sandra Hill  half an hour behind me! Very little of note on a cold and choppy sea.....Two Eider and Five Common Scoter, with lots of common waders along the shore as the tide fell. The harbour held one Peregrine.The area around Park farm produced the overwintering Grey Wagtail, plus the best bird of the day in the shape of a Firecrest (IP).

Pagham Lagoon/North Wall: Had a fruitless look on the Breech Pool for the Red-crested Pochard this morning - and fruitless for just about everything else bar a few Teal & Tufted Duck! No sign on the Lagoon either, though there were 6 Goldeneye (including one drake), at least 30 Tufted Duck and 50+ of both Common & Mediterranean Gull. (AH) 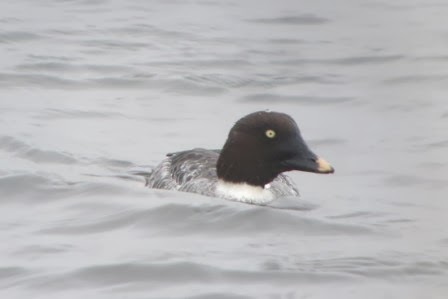 One of six Goldeneye on Pagham Lagoon (AH)

Hunston: At Kipson Bank Farm, just south of the village there was a huge flock of birds on the first half-flooded arable field from the main road, comprising at least 250 Fieldfare, up to 10 Redwing and similar of Yellowhammer, plus at least 100 each of Chaffinch and Starling. I'm not sure what is so appetising there, but it is a field that often attracts birds. (AH) 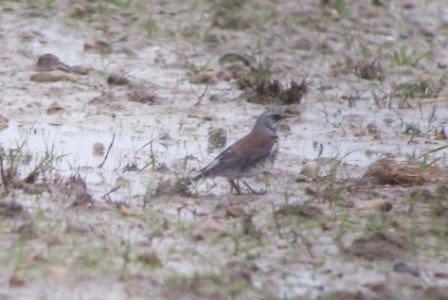 
After reading Ian's report I don't feel quite so bad about not seeing very much at Church Norton today.  At the foot of the path leading from the car park a flock of 12 Long-tailed Tits and a Treecreeper that obligingly 'froze' to the side of the tree as I took one of my bad photos.   I hadn't visited the hide for a while and it was a shame to see one of the benches had been defaced, as had the tree standing outside the hide.  A spot of sandpaper would probably bring the bench back to normal.  Low tide and poor visability, good numbers of waders but nothing out of the ordinary, a Peregrine sending up waves of Knot, Lapwings and Grey Plover.  There were at least 8 Red-breasted Mergansers and 7 Little Grebes but it wasn't the best day to visit Norton so I was glad to head for home (SR). 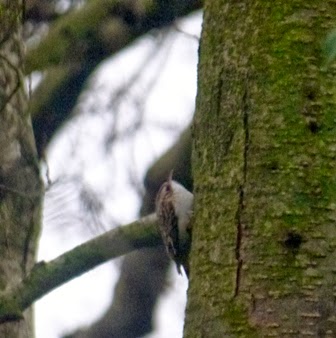 
Saturday, 11th January: At last a very welcome and gloriously sunny day with mild conditions. It seems that this induced some of the Peninsula regulars to take the opportunity of going off-piste, heading inland for year-listing purposes! Even so there was coverage, and Sarah Russell and Steve (the hat) came up with the bird of the day in the form of a female Red-crested Pochard at the back of the Breech Pool - it was sleeping amongst a small group of Mallards for most of the time I was there, avoiding any hope of a photo.
On the downside I must mention that recently I seem to be having a few technical problems with this blog site; currently this is resulting in some difficulty with loading any photos onto the blog. I am not sure if this is just due to my pc being incompatible with some aspects of the site, or whether it is a more general issue. Fortunately Andy House still seems able to upload data, so could you if possible send any info/photos to both he and I for the time being; Andy's assistance has proved invaluable in running the blog and I continue to be grateful for his input (OM).
Pagham Hbr: North Wall: A female Red-crested Pochard at the back of the Breech Pool. Other info gained whilst I was there includes reports of a Marsh Harrier this morning, the 2 Ruddy Shelducks again in the harbour, 300+ Golden Plovers and a hunting Peregrine (with thanks to Dave Shepherd and Steve) (OM). 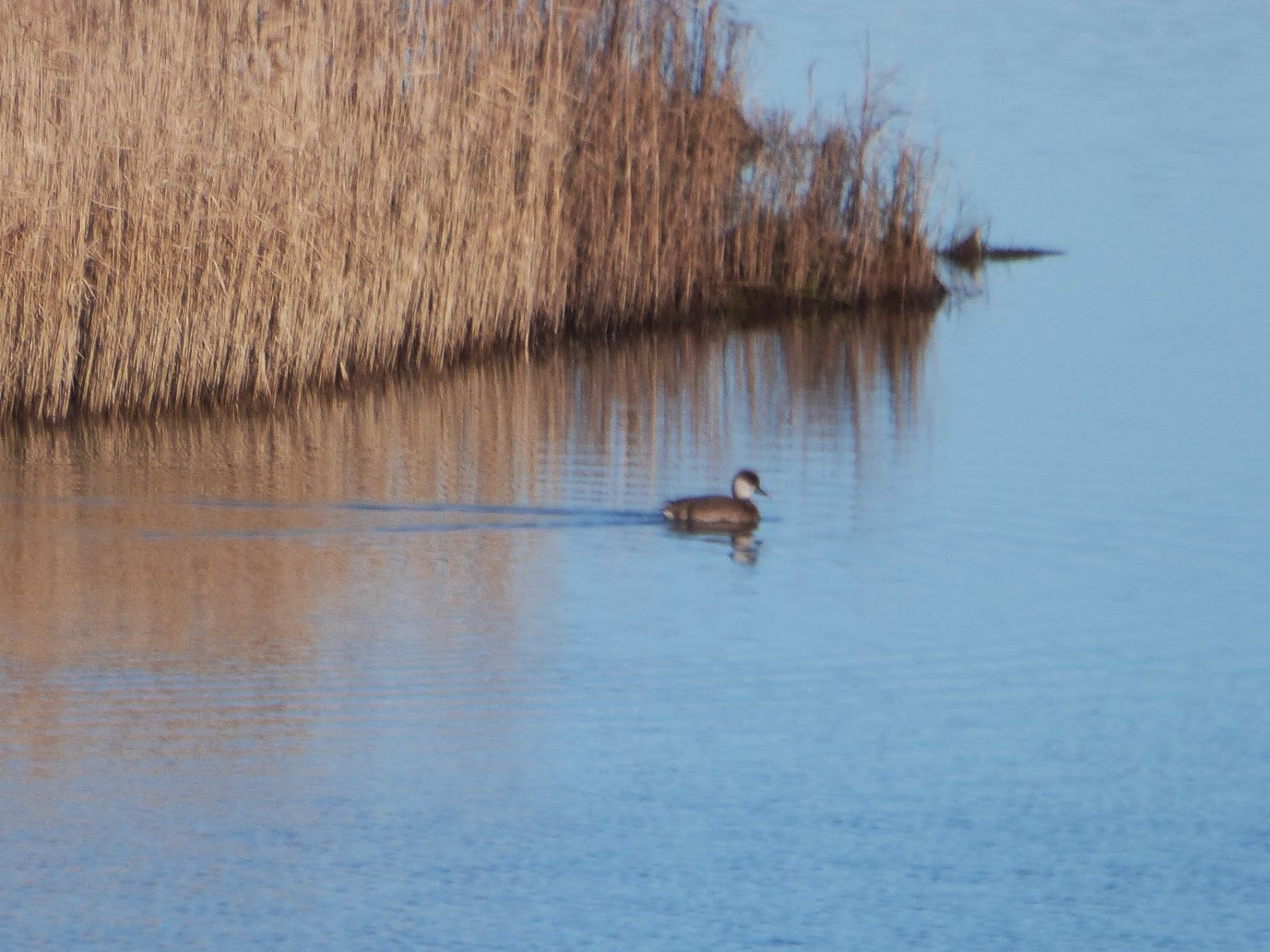 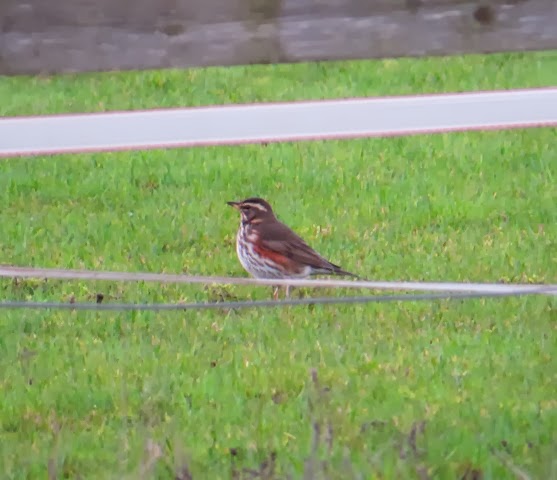