Thursday, 2nd January: A welcome change; sunny and bright for most of today until rain spoilt things late afternoon. I arrived at the Bill this morning to find clear-up operations going on after yesterday's storm, although the sea didn't produce too much other than a Little Gull, whilst Pagham Hbr was teeming with bird-life. It was a nice day to be out birding and a good number of birders were indeed out and about, so by the end of the afternoon a good selection of species had been recorded on the peninsula. Another unexpected highlight today was the arrival of ex-Selsey regular Tony Marr re-visiting his old haunts. 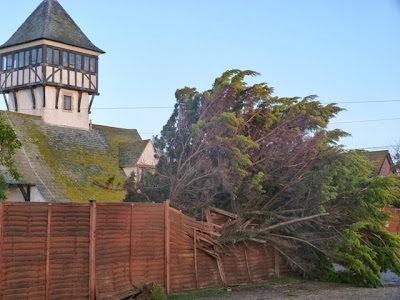 The aftermath of yesterday's storm - the old fir tree at Bill House garden is no more. 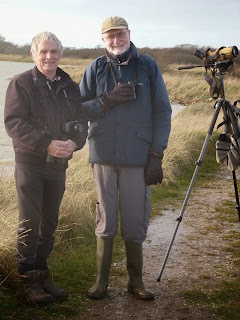 
Pagham Hbr: On Sidlesham Ferry Pool a good selection of wildfowl included the 2 Ruddy Shelducks and plenty of Common Shelducks and Wigeon. A flock of 18 Avocets and a Little Grebe were also present.
Church Norton: Plenty of waders present including good numbers of Grey Plover and Knot. Along the main path from the car-park were a Goldcrest, a nice Firecrest and a flock of Long-tailed Tits. A small covey of Red-legged Partridges were noted sheltering on field edges, avoiding the adjacent shooting party. Offshore the heavy swell made conditions difficult for viewing, but 5 Eider, 6 R/b Mergansers and several Great Crested Grebes were eventually located, but at first there was no sign of anything else, until Andy House came up with the goods and located four Long-tailed Ducks.
The North Wall / Breech Pool area was just teeming with birds. Brent Geese were wheeling around and a flock of Canada Geese were present. A massive flock of 800+ Black-tailed Godwits was on the flooded fields, together with 2 Spotted Redshanks, a rather sluggish Green Sandpiper, a Ruff, 15+ Snipe and a flock of c500 Golden Plover. A prominent Sparrowhawk was causing spectacular havoc with the waders and several Little Grebes were on the pool. Other observers also logged a distant Little Owl roosting near Honer farm (OM). 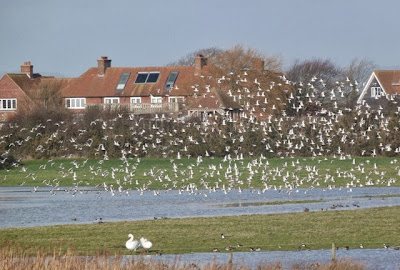 Flock of Black-tailed Godwits over the North fields 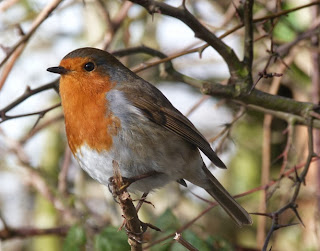 This delightful Robin escorted me along Church Lane (OM)
Tony was keen to see Medmerry so I gave him a brief guided tour... unfortunately there was plenty of mud but very few birds on offer, then as the rain closed in a very low-flying helicopter hovered over the site (perhaps surveying?), putting paid to any chance of further birding! 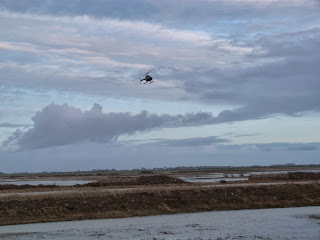 Low-flying helicopter over Medmerry
﻿
Two Whooper Swans were at Chi GPs Ivy Lake late this afternoon (Peter Callis).  Presumably these are  our regular wintering birds but they have been elusive up to now. Also about a dozen Pochard and 30+ Gadwall present (AH). 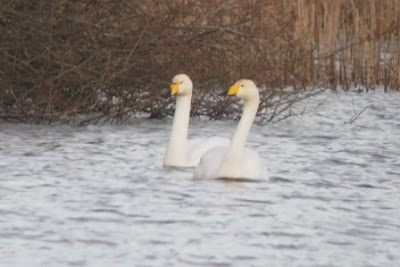 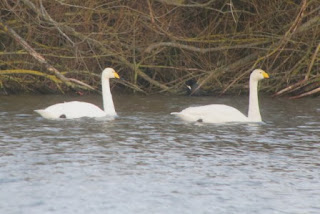 The 2 Whooper Swans at Ivy Lake (A. House)
East Head: Heaving with people and very few birds - about 20 Skylarks in the dunes, the usual waders on the falling tide, but nothing at all on the water from the northern end (AH) 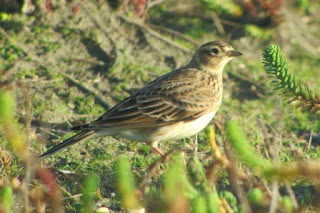 Skylark at East Head (AH)
Wednesday, 1st January: Gales and driving rain again ensured that the start of the new year continued in the same vein as the end of the last one. Yours truly decided on a day confined to barracks after a heavy night of celebrating, but surely no-one would be out birding today on the peninsula. Of course they would! Despite the weather the regulars were out there, and their reports follow... 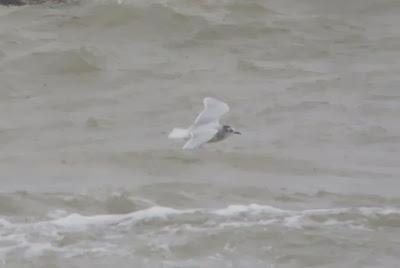 Little Gull off Selsey Bill (A. House)
Pagham Hbr: Sidlesham Ferry Pool: The two Ruddy Shelducks were on show this morning, along with about 80 Common Shelducks, 35 Shovelers enjoying the rain, and 200 Wigeon, 40 Teal, 100 Lapwing and 2 Redshank. (Adam & Paul Bowley reported a Kittiwake, a dozen or more Mediterranean Gulls, 30 Bar-tailed Godwit and a couple of hundred Knot in the harbour, but I was defeated by the conditions and gave up before I started!) (AH). 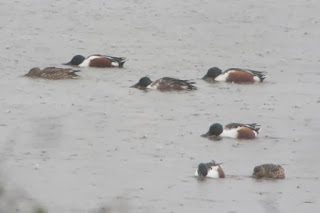 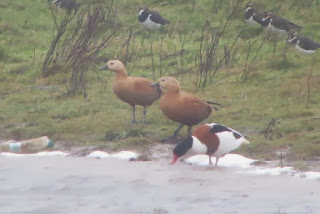 Shovelers (above) and Ruddy Shelducks with Common Shelduck on the Ferry Pool (AH)
Sam Hill would not be put off by the weather and bravely decided to do his regular walk from Selsey East beach-Church Norton in a force 7 gale with driving rain. He managed to log 31 species including  2 Kittiwakes, 20+ Med Gulls and a Stonechat. He commented, "I didn't see any other birders for some reason!" Well done mate.
Posted by Birderowen at 15:39