East Head: A glorious sunny morning was rewarded with a few good birds, mostly on the water - highlights were 2 Great Northern Divers, 3 Slavonian Grebes, 1 Eider, 5 Great Crested Grebes & at least 20 Red-breasted Mergansers. Quiet around the dunes - 40+ Skylarks and a few Meadow Pipits were about the sum, but I couldn't track down the Dartford Warbler. (AH). 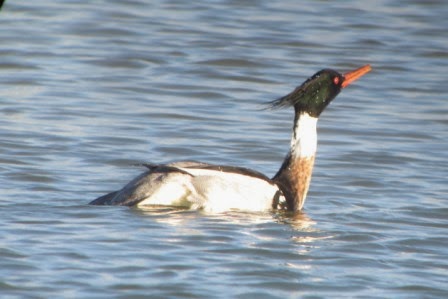 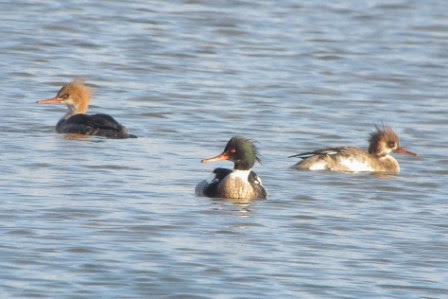 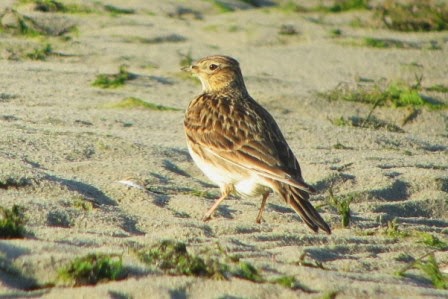 
Sidlesham SF: A quick stop  here produced a Grey Wagtail, a Rock Pipit, a Chiffchaff and a Reed Bunting amongst at least 200 Pied Wagtails and 30+ Meadow Pipits. 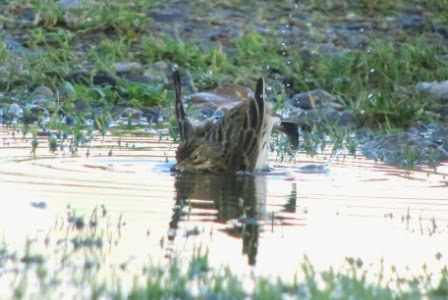 Meadow Pipit having a bath at Sidlesham SF (AH)
Info from Sarah Russell... I only went out briefly this afternoon along West Beach (Medmerry).  The caravan park is closed at the moment, the gates locked and rather annoyingly the barrier is in operation again, so I parked in West Street and walked along.  The lack of people was refreshing but there was also a distinct lack of birds today.  However I thought you might like this to see the storm damaged cliffs toward the Coastguard Station, great chunks have fallen onto the beach exposing old brickwork and pipes belonging to previous properties.  The footpath is still in operation but you have to go carefully (SR). 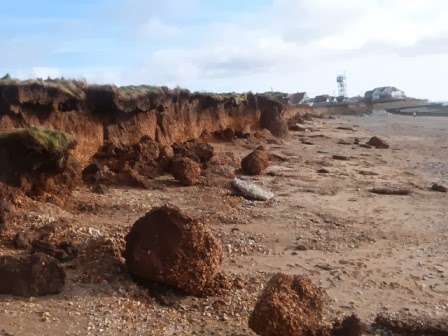 Medmerry Cliffs (S. Russell)
As mentioned in yesterday's blog, Bernie Forbes and I, with several guests, completed our Birdrace on the peninsula today. Unfortunately it turned out to be fairly unspectacular and we struggled to even reach a total of about 85 species (subject to checking) - probably our worst ever! The list of species we missed was both surprising and embarrassing (Ringed Plover, Skylark, Gannet, Goldcrest, Grey Wagtail, etc etc...) whilst highlights were few, though we did log at least 8 Spotted Redshanks in our travels, plus 3 Velvet Scoters off Church Norton, and a Slavonian Grebe and 2 Sandwich Terns off East Head. The mild weather and lack of birds contributed to a disappointing day and it may yet prove to be our swansong, but time will tell. 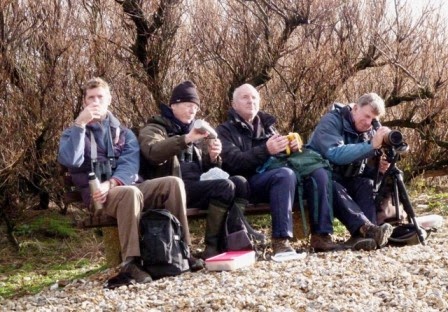 Thursday, 9th January: Wet and windy yet again overnight, but with the promise of some drier weather over the weekend.

Firstly, a record shot of the Dartford Warbler at East Head yesterday (Sarah Russell) which unfortunately couldn't be uploaded to yesterday's blog due to technical problems with Blogger. 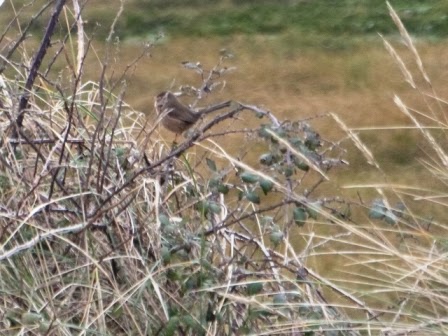 Pagham Spit/Lagoon: There were 4 Goldeneye, including one drake, on the lagoon this morning, along with about 20 Little Grebes and a dozen Tufted Duck. There were at least 200 Mediterranean Gulls around the harbour entrance, plus at least 100 Common Gulls, but I couldn't find much else out of the ordinary. 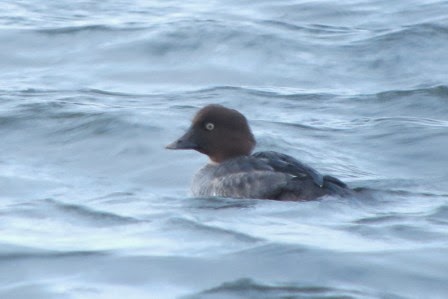 Can I just mention that I am due to do the annual winter Bird Race tomorrow, to raise funds for the SOS, and will be competing with my old mucker Bernie Forbes and several others. Our team (named 'The Muppets' after Waldorf and Statler, the two grumpy old men on the show) will be confining themselves entirely to the Peninsula, so if anyone is out birding on the patch tomorrow and finds something interesting, please could you give us a ring. Many thanks. (OM).