Saturday, 18th January: Cloudy, grey and cooler with a fresh SSE wind and showers. Drier and sunnier periods in the day.

Pagham Hbr: The harbour was equally as quiet when I arrived at Church Norton and strangely I didn't see another birder in the hour or so I was there at high tide. I did a double-take at the bizarre sight of a Sandwich Tern over Tern Island in January, the bird then drifting across to the East side, but otherwise it was all very mundane. Two or three R/b Mergansers were on show, but most of the waders were roosting, until something unknown (probably a Peregrine?) caused a mass panic of the Lapwings, Grey Plovers and Dunlin. I could see no sign of yesterday's Barnacle Geese from my viewpoint, although there was clearly a mass of birds out on the other side of the harbour towards the North Wall, too distant to identify (OM).

Friday, 17th January: And so it goes on... heavy rain overnight with a strong SSW wind, continuing into the morning, with a forecast of further rain into the weekend and drier spells at a premium. It sounds like sea-watching might be the best option again!

Pagham Hbr: Church Norton: More time spent dodging showers than looking for birds, and not much new to report - on the sea 2 Eider and 2-3 Red-breasted Mergansers, in the harbour 3 Red-breasted Mergansers, up to a dozen Bar-tailed Godwits and 3-400 Knot amongst the commoner waders, but very few wildfowl, and on dry(ish!) land a couple of Jays and several singing Goldcrests. Also at least 500 Brent Geese in the arable field south of the Ferry.(AH) 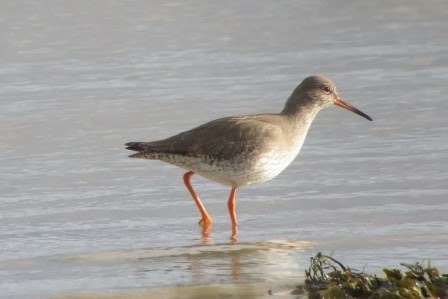 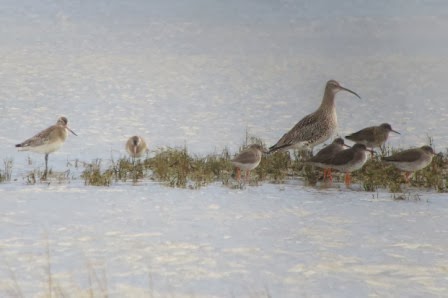 North Wall: All of the North Fields are flooded again and most footpaths are impassable. Birds seen: 47 Curlew, 36 Black-tailed Godwits, 210 Lapwing, 2 Greenshank, 180 Wigeon, 54 Teal and 3 Pintail. Also a pair of Sparrowhawks; the female is a big chunky individual. (JW).

Thursday, 16th January: Cloudy, quite cool and fairly windy with frequent showers.
A slow day on the Peninsula with only one item of news so far -  but as I've been absent myself from the patch for the best part of a week, trying to add to my year list, I can hardly complain ! (OM)
Pagham Hbr: a Great Northern Diver in the harbour at 14.08, reported by Ivan Lang.
Posted by Birderowen at 20:22