Sunday, 26th January: Back to normal weather conditions for this winter! Wet and windy from early on, but even so....

Church Norton: Not much to report in the deteriorating weather, but a huge flock (1000+) Brent Geese in the field behind the churchyard. Also a surprising number of big, well-established trees seem to have either split or fallen in the last few days in the vicinity.(AH)
There were 40 Mediterranean Gulls along the beach and a calling Cetti's Warbler this afternoon.(S&SaH)

Ferry Pool: The two Ruddy Shelduck were on there with Common Shelducks at 3pm.(S&SaH)

Saturday, 25th January: A brighter, drier morning with some pleasant sunshine, but wet and windy again by mid-afternoon, with more rain due this weekend. First news today was of a short sea-watch at the Bill which produced a few divers, several Slavonian Grebes and an ad Little Gull. Later, the Glaucous Gull at Church Norton was sadly found moribund and taken into care.


Church Norton: Sad news to report from Ivan Lang this morning, that the Glaucous Gull was picked up on the end of the spit, in a very weak state, and taken to Brent Lodge. Fingers crossed that some food and TLC will work. (AH)


Fishbourne Creek: A nice selection here this morning, including at least 20 Yellowhammers still, with two or three Reed Buntings for company, the regular Grey Wagtail, a Stonechat, three Rock and a dozen Meadow Pipits along the pathway, and a Cetti's Warbler heard. In the harbour there were single Lesser Black-backed & Yellow-legged Gulls in amongst the gull flock, at least 700 of which were Common Gulls. There were also three Spotted Redshank, a Greenshank and at least 300 Black-tailed Godwits present, but I failed (again) to find the Whimbrel that was around in the autumn. (AH) 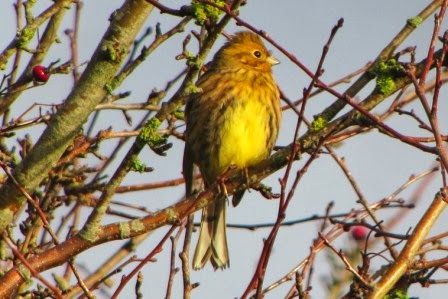 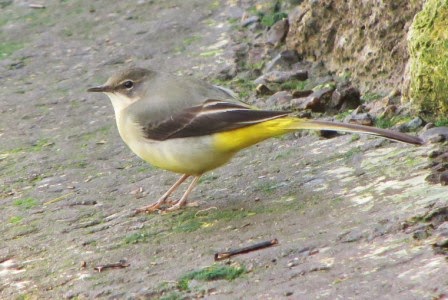 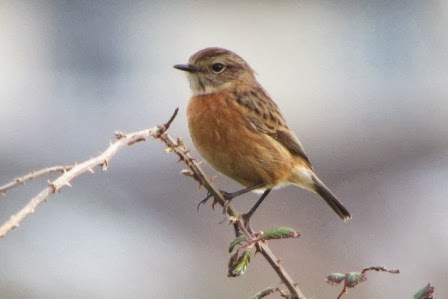 Friday, 24th January: So where's all the rain? The forecast was for heavy rain most of the day, but by noon it was still only just damp with a bit of light spitting and drizzly stuff - though it is noticeably cooler today with a fresh SSE breeze.


Pagham Hbr: Church Norton: Main news of the morning was that the Glaucous Gull was back, this time on the beach. Its left wing appeared to be hanging a bit, but it can clearly fly - not least because an 'injured' adult Glaucous Gull was reported on the Isle of Wight during the week, which must surely be the same bird. 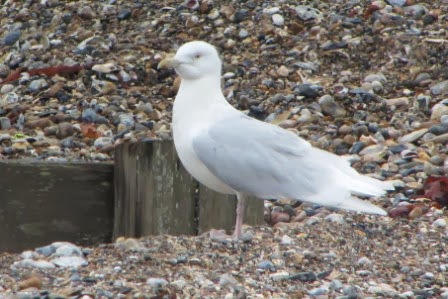 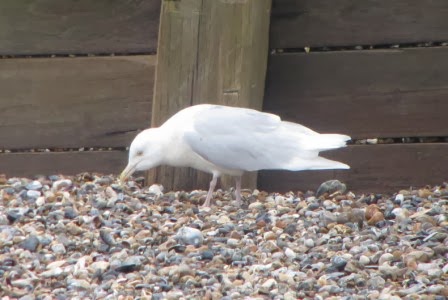 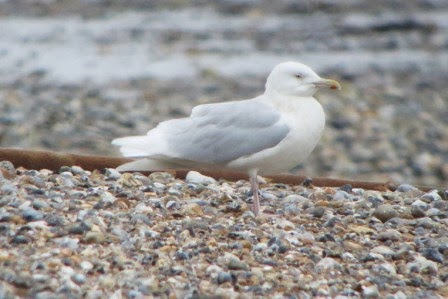 Otherwise it was quiet - just a single Eider and Red-breasted Merganser offshore, and about 150 Knot and a dozen Bar-tailed Godwits amongst the waders on the beach, along with 30+ Mediterranean Gulls. One other thing that I had not observed before was a Common Gull repeatedly dropping a whelk onto the beach like the Herring Gulls and Crows do to break its shell. Evolution in the making, or a lack of observation on my part? (AH). 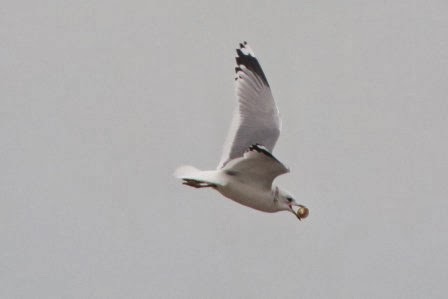 Common Gull preparing to drop a whelk on Church Norton beach (AH)
There was still a pair of Goldeneye on Pagham Lagoon this morning amongst the many Tufted Ducks and Coots. A single Slavonian Grebe showing nice and close in amongst the Little Grebes, allowing good size comparison (SR).
Posted by Andrew House at 11:58