Thursday, 23rd January: Back to another forecast of plenty of rain over the next few days with fronts still piling in off the Atlantic. This morning's rain altered my plans somewhat and I found myself making a late start down the Bill with a stiff westerly blowing - with a predictable outcome! I managed to last for a little over an hour but there was very little happening so it was time to move on. Fortunately the rain stopped and the sun appeared, making birding a lot more pleasant, but it was all fairly average today with nothing out of the ordinary that I could find (OM).

Selsey West Beach: A brief stop here failed to find any birds worthy of mention, save for a Kestrel hovering over the edge of the eroded 'cliffs.' It should be mentioned that there is a sign saying the footpath along this stretch has officially been closed for the time being for public safety reasons, due to coastal erosion, though there is nothing to physically stop access. The path is mighty close to the edge in a couple of spots and it's surely only a matter of time before it disappears. 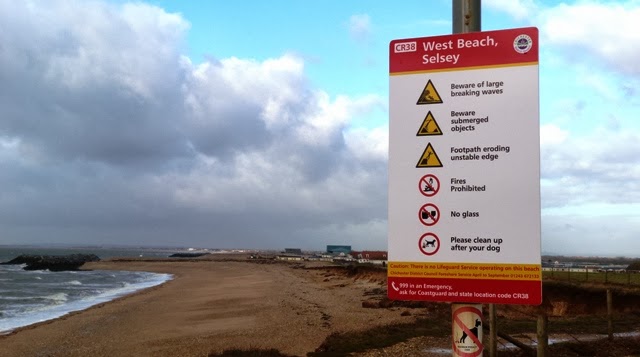 West Beach Selsey, looking towards the Medmerry breach. Note the crumbling cliffs on the right, with the footpath right on the precipice and the now very adjacent fence line (OM).
Pagham Hbr: I spent some time at Church Norton on the rising tide, sorting through the Brent Goose flock and the large number of waders on the mudflats, but despite my best efforts I could find nothing unusual. There must have been 300 Grey Plover and a similar number of Golden, perhaps 500 Knot, loads of Dunlin and 6 Bar-tailed Godwits. The dark-bellied Brent Flock of around 1500 was commuting between the mudflats and the adjacent farm fields to the west - and being frequently disturbed on the latter. Two Peregrines were roosting on their favoured island, whilst in the harbour a Goldeneye and several R/b Mergansers were present. A party of Hants birders who walked up the  whole of the west side informed me of at least 10 Avocets in the channel (OM).

Part of the dark-bellied Brent Goose flock at Church Norton, commuting between the fields and mudflats (OM).

Wednesday, 22nd January: Dry and generally pleasant with sunshine and some cloud.

Pagham Spit & Lagoon: Spent the morning around the Lagoon and spit in bright sunshine. Best bird was the very confiding Slavonian Grebe on the lagoon - it's not often we see this familiar, but charming, species so close. Also on there were 5 Goldeneye (including two displaying drakes), 2 Red-breasted Mergansers, at least 40 Little Grebes and 20 Mediterranean Gulls.
In the harbour the two Ruddy Shelducks were still present, along with another 10 or so Red-breasted Mergansers, 30+ Mediterranean Gulls and about 500 Black-tailed Godwits, and there were 6 Skylarks along the spit.(AH) 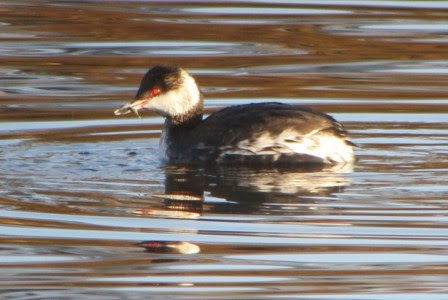 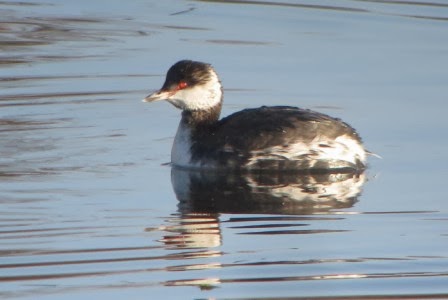 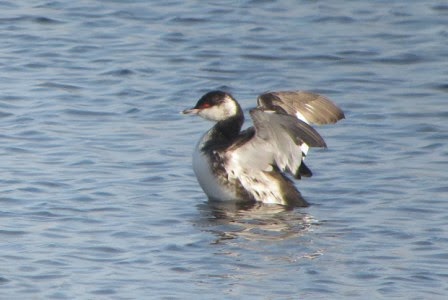 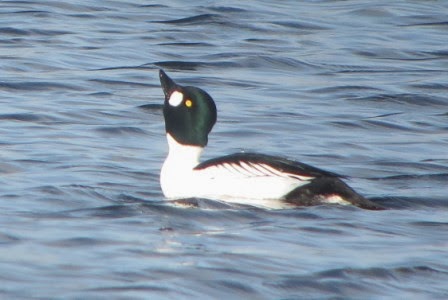 Tuesday, 21st January: A cold and frosty start, with thick fog lingering to mid-morning, then mainly dry and fairly sunny with light wind.
A late start for me as I waited for the fog to clear, before deciding to stick to the west side of the Peninsula to try to find myself a Jack Snipe, a species that has eluded me so far this year. I gave it some wellie (literally) checking out all the regular sites and a few other likely-looking spots - all to no avail as I failed to connect. Fishbourne Creek was a disappointment and the tide was well up on my arrival, the best on offer being just three R/b Mergansers, a Goldeneye and a showy Buzzard. Things were better at Snowhill Marsh (W. Wittering) where the highlights were four Spotted Redshanks with two Greenshank, and a delightful roosting flock of 180 Golden Plover sparkling in the sunlight. Another showy Buzzard was eating worms, whilst the less said about East Head the better. I thought the frosty conditions might have done the trick but perhaps it's still too mild? (OM).

Pagham Harbour:  There was an '-eared owl sp' flushed from the bank along the North Wall early on, but I could find no trace, though a Water Rail flying out of the long grass and into the reeds was a surprising consolation, before I gave up in foggy despair. A brief look at Church Norton failed to find the Glaucous Gull, though it was back on Tern Island late afternoon (per Birdguides). Quiet on the sea, too, with just a single Slavonian Grebe, Eider and Red-breasted Merganser noted. (AH)
Posted by Birderowen at 16:05