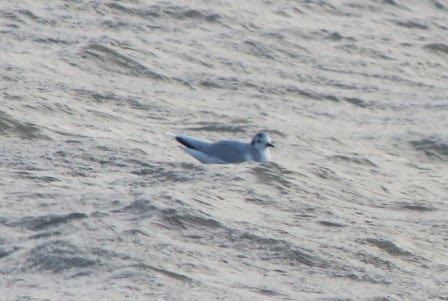 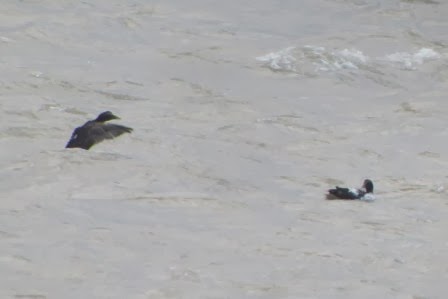 Selsey: A visit to East Beach Pool and then West Beach produced nothing of note (OM).


Pagham Hbr: At Church Norton the tide was still fairly low when I visited; nothing unusual seen but a large flock of 1000+ waders on the mudflats included Grey Plovers, Knot, Dunlin, Lapwing, perhaps half a dozen Bar-tailed Godwits and a few Ringed Plovers (OM). Offshore a couple of Eider and a few R/b Mergansers were picked out but the rough sea made things almost impossible at times.
North Wall: Jim Weston reports' The western end of the North Wall is very much churned up by bicycles and care needs to be taken as it is very muddy and slippery. Quite a surprise this morning - not a single Godwit to be seen, Wigeon numbers were also way down and across the fields I only counted 47. Lapwing were very hard to count as they were continually disturbed and groups were flying backwards and forwards to the Harbour. At the peak there was not less than 2000 birds. Behind the Breech Pool 151 Curlew, 4 Redshank and 2 Snipe. Also there 82 Canada Geese and 68 Teal. No sign of Shovelers this morning. There is big flock of Brent up by Beckett's Barn and I estimated 2100. A Cetti's Warbler calling along the Wall and 2 Buzzards sitting on the back fence (JW).
Ferry Pool: The two Ruddy Shelducks still present this morning, and a few Golden Plovers were in amongst the large Lapwing flock. (AH) 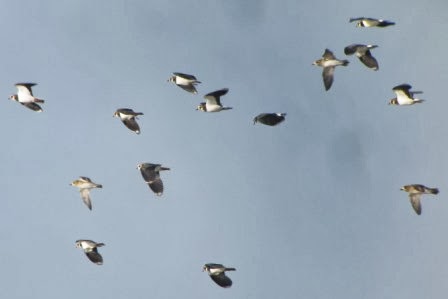 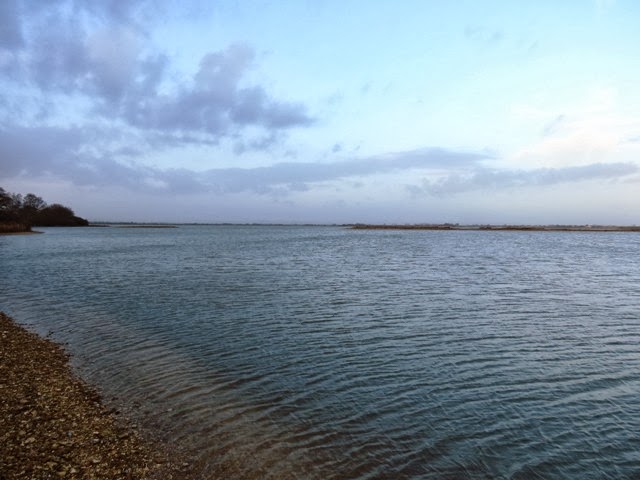 (above) Ruddy Shelducks, Common Shelducks and Shovelers on the Ferry Pool, and (below) Pagham Hbr on a high tide (Photos: Lee Evans)
Chi GPs: An early afternoon visit to Ivy Lake failed to locate the fem Red-crested Pochard reported a few days ago, just a group of around 15 Gadwall was the nearest I could get. (No reports either of the 2 Whooper Swans seen a couple of days ago). Not much excitement either at the Drayton pits; over 50 Gadwall there plus 30 Shoveler and just the usual assortment of common wildfowl.

Sunday, 5th January: A dry start to the day for a change, but sure enough red sky in the morning means shepherd's warning, and another storm with heavy rain is forecast for this afternoon.

Still at least 2 Long-tailed Ducks offshore with 4 female Eider and double figures of Red-breasted Merganser. Plenty of common waders again in the harbour, plus a pair of Peregrines on their island and the pair of Ruddy Shelduck were on the mud in the harbour. Nothing much else of note except for the amount of water in the two Severals and the inland sea lake from yesterday has now soaked away (IP, S & SaH).

Pagham Hbr: North wall: Numbers in the fields behind the Breech Pool were way down on last evenings impressive numbers: 470 Lapwing, 260 Black-tailed Godwits and 45 Wigeon. Amongst the Godwits were 2 Spotted Redshank and, surprisingly, 1 Knot. In the flooded field immediately north of the stables were 1100 Lapwing, but they were very skittish and did not settle for long (JW).
A redhead Goosander at Church Norton, near the harbour entrance, also a handsome drake Goldeneye. The high tides had left an interesting selection of starfish and green sea urchins along the strand-line too (SR).
Posted by Birderowen at 08:01